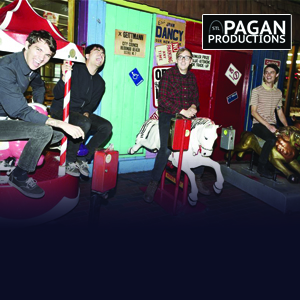 Joyce Manor was conceived in the back of a car in the Disneyland parking lot—the kind of beginning California dreams are really made of. It was the fall of 2008 over a bottle of cheap booze when co-founders Barry Johnson (guitar, vocals) and Chase Knobbe (guitar) decided to team up. They formed a power violence band where everyone would have Johnny Thunders-style glam-names … like “Joyce Manor” named after an apartment complex Barry walked past every day. But when longtime friend Andrew Jackson Jihad suddenly asked Barry if his old band wanted to open for their LA show, he scrambled to say yes.

So Joyce Manor made their debut as an acoustic two-piece, with Chase and Barry quickly learned that they were really a pop-punk band trapped inside a folk-punk duo—too many songs just demanded bass and drums. “Playing loud is just more fun,” explains Barry.

By the end of 2009, they’d made a new friend in new drummer Kurt Walcher and welcomed old friend Matt Ebert back from Portland to play bass. (“He moved back like, ‘Dude, wanna start a band?’” says Barry. “And I said, ‘Wanna be in THIS band?’”) With their line-up settled, they attacked their songs with new enthusiasm and neurotic precision, discovering their own kind of beauty in simplicity and pursuing heartbroken punk perfection.