Joe Edwards’ creative vision, risk-taking, and leadership have helped transform The Loop into one of the most vibrant restaurant, shopping, arts & entertainment districts in the United States. Download hi-res photos of Joe.

Joe also has renovated numerous historic buildings (including creating the Flamingo Bowl on Washington Avenue) and encouraged one-of-a-kind specialty shops and cultural institutions to make The Loop their home. He spearheaded the Loop Trolley, a vintage fixed-track trolley system which runs from the Delmar Loop to Forest Park and back.

The American Planning Association designated the Delmar Loop “One of the 10 Great Streets in America.” Dine at one of the award-winning, multi-national restaurants. Immerse yourself in the rich social, ethnic, and cultural diversity of this Historic District.

Set in the sidewalks of the exciting restaurant, shopping, arts & entertainment district called The Loop, it’s open 24 hours and is free.

3-89 Joe and Blueberry Hill were featured in Archie comic book #204 Archie’s Pals ‘n’ Gals. In the six-page story Joe “actually” got to meet Archie and Jughead at Blueberry Hill. (Only in the parallel universe of a comic book could this event have happened. They rarely ever feature real people.)

11-8-92 Received the 1993 Elijah P. Lovejoy Award for distinguished commitment to human rights and justice in the St. Louis Community.

5-16-95 Received from St. Louis County a special proclamation citing his various projects and his dedication that inspired the revitalization of The Loop. The award, presented by County Executive Buzz Westfall, proclaimed May 16, 1995 “Joe Edwards Day.”

5-28-96 Selected to carry the Olympic Flame as a “Community Hero” torchbearer for the 1996 Olympic Torch Relay.

4-24-98 Received proclamation from Mayor Harmon of St. Louis. “Joe Edwards has provided the civic leadership and vision for the revitalization of city life and has maintained a strong presence and support for many cultural events in our community.” “Joe Edwards is recognized for his love of St. Louis, his respect for our unique heritage and his willingness to spearhead and support projects that celebrate St. Louis and represent all the good things that are possible for our city.” The Mayor proclaimed April 24-26 as Joe Edwards days.

12-98 Originated holiday lights in The Loop (24 garlands across Delmar), which add to the ambiance of The Loop every November and December.

10-00 Built The Pageant Building, a 50,000 square foot multi-use building that includes a nationally known concert nightclub, two retail stores and 14,000 square feet office space at 6161 Delmar. It signaled the extension of The Loop into the City of St. Louis and the bridging of the artificial City/County border.

10-19-00 Grand opening of The Pageant, a state-of-the-art 33,000 square foot concert nightclub designed for live music productions and special events. This 2,000+ capacity venue features superb sightlines and acoustics plus a balcony (with Pat Hagin).

6-02  “Show Me Award” from Gov. Holden and State of Missouri for building The Pageant Building that spurred redevelopment on Delmar east of Skinker Blvd. in the City of St. Louis.

5-10-03 Received “Key to the City of St. Louis” from Mayor Francis Slay at the ribbon cutting ceremony celebrating the re-opening of meticulously renovated 6172-78 Delmar building that was constructed in 1912. The day marked another milestone in expanding the vibrant Loop in St. Louis.

8-03 Arranged for the non-profit Regional Arts Commission to construct its new headquarters building and gallery at 6128 Delmar in The Loop.

11-17-03 Received the St. Louis Award. The St. Louis Award was established in 1931 to honor “the resident of metropolitan St. Louis who has contributed the most outstanding service for its development or … shall have performed such services as to bring greatest honor to the community.”

3-3-04 Received the McReynolds Award from Missouri Preservation for work done in revitalizing The Loop and multiple preservation projects. Ceremony was in Jefferson City in the Missouri Capitol Rotunda.

5-3-06 Received the 2006 Community Betterment Award from the Missouri Growth Association.

4-2-08 Received Outstanding Missourian honor from the House of Representatives at the State Capitol during 94th General Assembly. Presented by Representative Rachel Storch.

6-11-08 Received Brotherhood Sisterhood Award from The National Conference for Community and Justice of Metropolitan St. Louis. The NCCJSTL promotes understanding and respect among all races, religions and cultures through advocacy, conflict resolution and education.

4-17-09 Opened the Moonrise Hotel, an independent, 125-room boutique hotel in The Loop at 6177 Delmar. It includes the Eclipse Restaurant, several meeting/event spaces, the Rooftop Terrace Bar and fascinating displays of lunar and space memorabilia.

6-14-09 Honored by the NAACP as one of the Most Inspiring St. Louisans-Individuals whose ideas, talents, power, and ability to change people’s lives for the better, has helped to shape and transform the St. Louis community.

11-8-09 Delmar Loop Planet Walk dedicated as the newest educational attraction for The Loop. Joe Edwards arranged funding and three governmental approvals for this scale model of our Solar system (designed by Steve Walker).

12-09 Honored by St. Louis Magazine as a St. Louis Luminary (People whose ideas glow so brightly, they illuminate a path for the rest of us.)

6-27-10 Honored by the NAACP as one of the 25 Most Inspiring St. Louisans at Freedom Fund Dinner.

12-5-11 Received “Pillar in the Community” Award from the Clayton Chamber of Commerce at the Ritz-Carlton.

12-15-11 Served on Leadership Task Force for The Confluence Partnership.

10-12 Orchestrated procurement, design and installation of whimsical Bicycle Racks throughout The Loop.

4-16-13 Received “Ethic of Service Award” from Washington University. The award was created to honor WU community members who believe in and shape the future of our region.  Honorees exemplify a character of service and giving to the St. Louis region. (Gerry & Bob Virgil hosted the reception & dinner.)

9-12-13 Received the lifetime achievement award from the Landmarks Association of St. Louis for his work in historic preservation and community revitalization.

The Peacock Diner’s décor is visually striking from the 11-foot wide neon sign, whose feathers fan in and out 200 times an hour, to the display cases of peacock memorabilia, old-time diner ephemera plus the rotating Carousel of Love booth for special occasions. The Peacock Diner might be the greenest and most sustainable diner in the United States – it received LEED Platinum certification.

3-12-15 Groundbreaking ceremony for $51 million Loop Trolley project. Joe was and is chair of the Loop Trolley Transportation Development District. He came up with the concept and started working on building this fixed-track, vintage trolley system in 1997. For more information, see the Loop Trolley’s grand opening entry in this bio.

9-29-16 Received the Maestro Award from HSMAI (Hospitality Sales & Marketing Association International (Missouri Chapter). Given to an individual who coordinates and unites the efforts of many in moving their organization forward.

11-15-19 Dedication of Loop Trolley, a fixed-track heritage trolley system that connects the Delmar Loop and Forest Park. The ceremony is held at Delmar Hall (due to snow storm). Golden Spike symbolized bridging east/west and north/south.

The 2.2 mile route runs from the University City Library east on Delmar Boulevard to DeBaliviere Avenue and then south on DeBaliviere Avenue to the Missouri History Museum and back.It connects The Loop and the 12 million visitors to Forest Park attractions. It also connects with two Metrolink stations (Delmar Loop and Forest Park). The colorful, electric trolley cars operate in the existing traffic lanes through The Loop and a single dedicated track along the rest of the route.

The system is an economic stimulus for this designated redevelopment area. It will further stabilize the neighborhood and improve the quality of life for people that live and work in this exciting, diverse city area.

It can be a prototype for growth and stabilization in other neighborhoods in the region. Not only can the trolley be an attraction; it can be a source of pride for the metropolitan area. 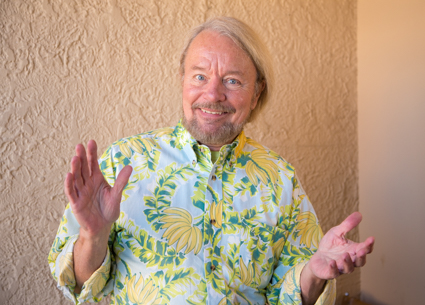 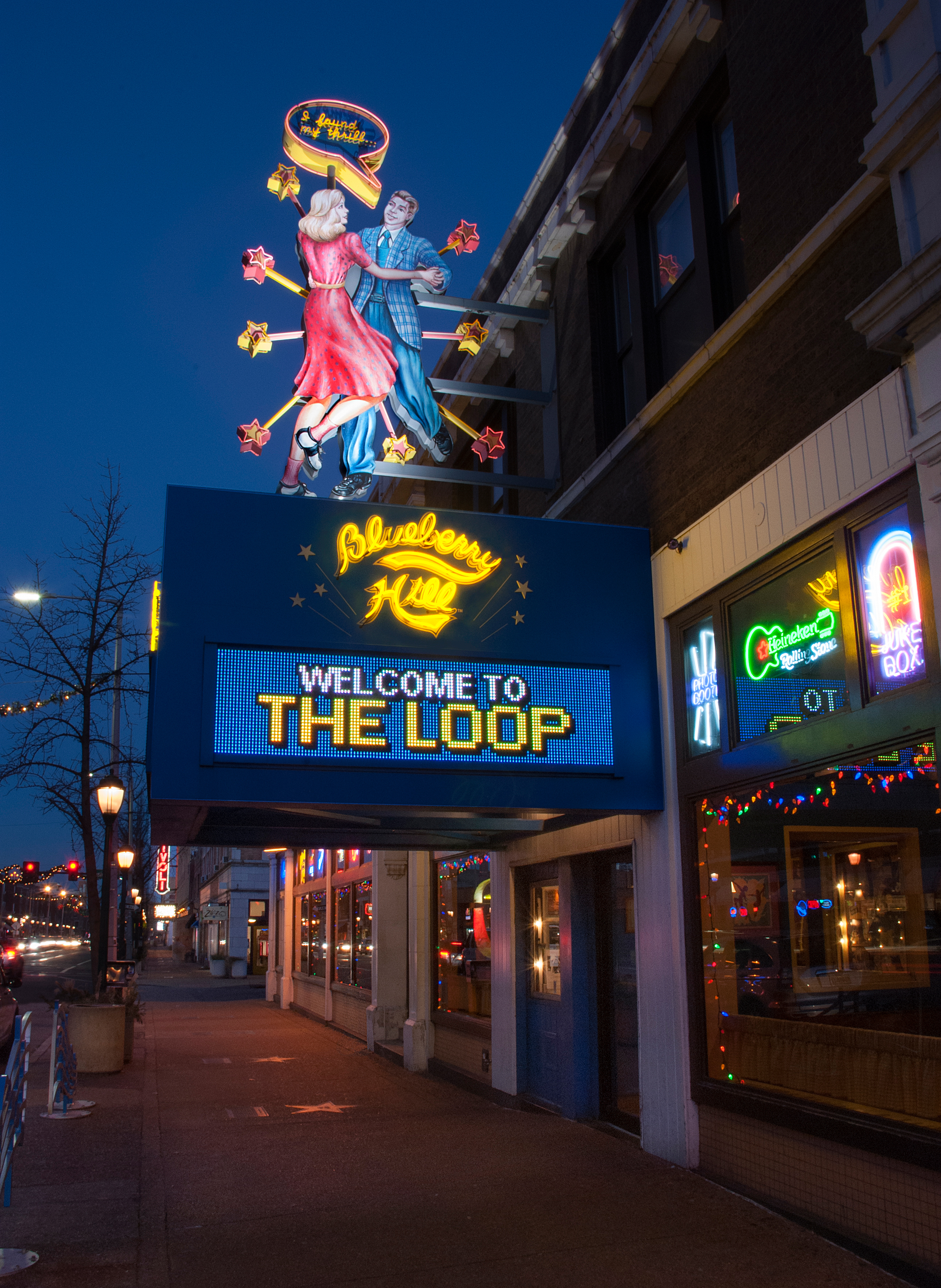