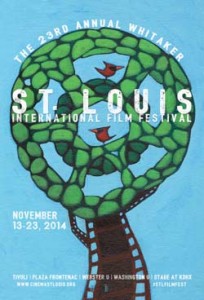 The Whitaker St. Louis International Film Festival returns for its 23rd year in 2014. Running from November 13th to the 23rd, the festival gives St. Louisans the opportunity to see 389 films from filmmakers in 69 countries. That’s a lot of films! Each one represents a chance to experience something new, to see a place you’ve never been, a brief glimpse into another world.

While seeing all 389 films is probably impossible, we recommend that every St. Louisan make a thorough perusal of the catalogue and an honest effort to attend the films that spark their interest. And if you end up seeing a film or two at the Tivoli theater, or Brown Hall at Washington U, we strongly recommend that you stop in Blueberry Hill beforehand for a famous hamburger, and again afterwards for a round of beers and a revelatory discussion of the film!