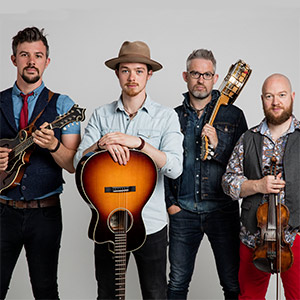 For all the innovation and invention that goes into modern music these days, it’s the inspiration derived from one’s roots that proves the most enduring. So credit Galway, Ireland’s We Banjo 3 for finding common ground between old world tradition and authentic Americana by plying their banjo, fiddle, guitar and mandolin in an innovation fusion of styles that they dub “Celtgrass.”

Four albums in — their latest, String Theory, was released in July of 2016 — the band’s rousing revelry, sheer virtuosity, power, passion and purpose have made them one of the music world’s most celebrated ensembles. Variously described as “astonishing,” “the Gold Standard of Irish and American Roots music,” and “the Irish Punch Brothers,” they’ve can claim the # 1 position in Billboard’s World Music charts, top honours from IMRO (the Irish Music Rights Organization), top sales numbers and the distinction of entertaining an American president, an Irish Prime Minister and members of the U.S. Congress at the annual “Friends of Ireland” luncheon on Capitol Hill. Little wonder then that We Banjo 3 is literally taking both sides of the Atlantic by storm, carving a reputation as one of the world’s most imaginative ensembles.

Of course, all results are generally due to the sum of the parts, and the individuals involved here all contribute to the common cause. Made up of two sets of siblings — brothers Enda Scahill (tenor banjo, vocals) and Fergal Scahill (fiddle, viola, dobro, percussion, guitar, mandolin, vocals) and brothers Martin Howley (tenor banjo, mandolin, vocals) and David Howley (lead vocals, guitar) – We Banjo 3 finds a natural symmetry as well as a cohesive chemistry that’s been imbued in the band ever since they were initially drawn to one another by their common creative interests. Inspired by the traditional Irish and Americana music they heard growing up, they placed three banjo players in the mix in the beginning, eventually diversifying their sound while broadening their boundaries as well.

Likewise, the individual members brought a credence that extended well beyond their family connections. Martin is a seven-time all-Ireland banjo champion and the first Irish musician to perform at the Grand Ole Opry. Enda has recorded with Ricky Skaggs, the Chieftains and many others, aside from being considered as one of the world’s leading authors and authorities on Irish banjo techniques. Fergal has performed with dozens of artists at home and abroad, and is widely recognized as an Irish champion of both fiddle and bodhran. David has been cited as a solo artist of exceptional skill, while Garry is a veteran of work with numerous bands and individual artists.

Likewise, the evolution in the group’s sound followed a natural progression that evolved early on. Their 2012 debut album, Roots of the Banjo Tree, leaned entirely on banjo music and the various styles implied by that instrumental arsenal. Their critically acclaimed sophomore set, Gather the Good, released in 2014, furthered that vantage point, an aural summation of the impressions and experiences gained while touring the U.S. and their initial introduction to Nashville that was followed by the release of 2015‘s Live in Galway, recorded in the same small hometown pub where the band performed their very first gig.

Their new album, String Theory, appears to be a change in their tack, but only slightly. Half traditional covers, half original material, it finds the band’s reverence for their roots given a contemporary twist, further solidifying the common bonds between the two styles. The various jigs and reels underscore the band’s celebratory stance, but on a tender ballad like the 17th century soliloquy “Two Sisters,” the mix of love, jealousy and evil intent sound tailor made for modern times. While the instrumental interplay is in evidence as always, each individual musician adds his own distinctive style, further affirming their collective cause.

Indeed, anyway you look at it, We Banjo 3 adds up to one exceptional outfit.