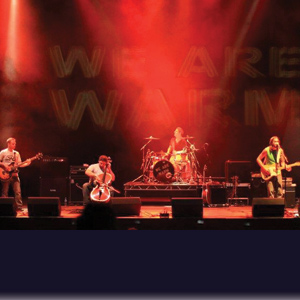 In 2005, We Are Warm formed in Chicago with Derrick Streibig on guitars, keys and vocals, Charlie Hogland on drums, and Pat Ritter on bass, performing as Festival. Streibig relocated to Southern California in 2007 and spent the better part of three years reclusively writing and recording music. During these years, acting as a true introvert in the foothills of the Laguna Mountains, Streibig found himself as a writer. His message and purpose became clear, shaping what the band’s music has become today. In 2010, he relocated to Saint Louis, Missouri to reunite with Hogland.

They decided to change their name to We Are Warm, feeling it was a nice accompaniment to the positive message and welcoming aura within the music. Over the past few years they have already supported acts like My Morning Jacket, Bon Iver, Manchester Orchestra, Here We Go Magic, Lucius, Everest and Nicole Atkins. After much time spent recording and building the concept of what We Are Warm is, they were ready to present themselves to the world in full. In May of 2015, they added bassist Brandon Hall to round out the live sound. They are excited to share their music with the world.