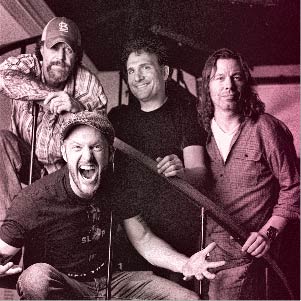 One resounding truth that sets a great story apart from just another tale is the unexpected presence of the extraordinary, coming from the ordinary. With St. Louis band Waiting For Flynn, it’s apparent that a great story is in the making, and coming through in their writing, and unique individual styles of play. Bringing a fresh and true roots blend of acoustic and modern pop rock, Waiting For Flynn intertwines improvisational explorations, with soul and jazz elements into a harmony heavy vocal experience.

Though each member is from the great city of Saint Louis, they were brought together through vastly different experiences and musical influences. With guitar player and vocalist Michael Flynn (writer and front man for Shooting with Annie), and drummer Tobin Hall (consummate side man and touring vet) growing up together in music, they toured Europe and the U.S. playing an array of venues with multiple bands both together and separate.

Bassist Brian Schultz, who most recently has been featured on albums with artists Kelly Clarkson, Rihanna, Jeremih, CeeLo Green & Keith James, and SoMo, has made his mark in both the world of music, as well as with his award winning work in graphic design. Then there is face man / front man, guitarist, and songwriter Dustin Brown, who’s commanding voice and thoughtful stories are at the very core of this dynamic group.

With all of their differences, there is one thread that ties them together, and that is creating and performing music that resonates, captivates and entertains. Waiting For Flynn is earning their place as one of St. Louis’ premier live bands. No autotune or click tracks. This is the real deal.

Two Cities, One World is more than just a clever moniker referring to St. Louis and Sofia, their cities of origin. It’s been their defining mission since joining forces to spread a positive message and their beautiful, rhythmically eclectic music for the world. Big believers in the importance of personal and spiritual development, Anna and Jared – who released their debut EP Together in 2014 – compose all their songs together, with much of their inspiration drawn from years of traveling throughout the U.S. and Europe, and even a lengthy separation due to immigration and visa issues. “We’re not just creating music here,” says Jared. “We’re about a lifelong dedication to supporting people positively in the world. Everything we talk and write about is super empowering and using our outlets as artists and performers to command truth, spread love and inspire people to do great things.”