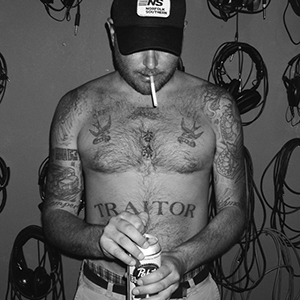 Right now, Tim Barry is detoxing. Not from drugs or alcohol, but from his own music. “When the record’s finally done, and the master is approved, I erase every file that’s been sent to me and I throw out all the CDs with all of the rough mixes. I get rid of everything,” says Barry. And that’s exactly where he’s at, in the middle of cleanse from his own work. But on September 8, he’ll sit down with his new record, High On 95 (Chunksaah Records), one last time. And like everyone else listening to it that day, it’ll be for the first time. “I generally never listen to the record again except one time on the day it comes out,” says Barry. “That’s when I actually hear the record from the perspective of the people who are into it.” And what those people will hear—along with the artist himself—is a record that explores the human condition in classic Tim Barry fashion.

“Slow Down” opens the record and sees Barry tearing at his guitar strings while weaving a tale about alienation, shame, and getting the hell out of Brooklyn. His sister Caitlin Hunt’s lonesome violin joins him on his journey, as Barry’s burly voice lumbers forth, admitting faults (“I’ve always been thirsty / I’ve always been a wreck”) but never becoming defeated. It’s a song that sets up the themes that will be touched on time and again throughout High On 95: Fear, loneliness, pain, and isolation. But for all these anxieties, Barry never wallows. Instead, he finds hope in the journey.

“If I’m talking about real life shit, just getting things off of my chest, if they don’t have an element of hope, then there’s no use in writing it,” says Barry. And for every moment that aches with a feeling that borders on defeat, it’s flanked by Barry’s perseverance and unbreakable work ethic. While there’s a song like “Running Never Tamed Me,” which Barry says caused his two daughters to break down crying the first time they heard it, there’s a song like “Riverbank,” which carries a foot-stomping swagger that invites you into the anthemic ruckus. Against a steady backbeat, vamped piano, and Neil

Young-esque, single-note solos, Barry becomes the ringleader of a triumphant chorus, guiding his collaborators to the song’s apex.

“I become the conductor,” says Barry, explaining that his process of leading his assembled studio band involves a whole lot of humming what he hears in his head and some wild, impassioned gesticulating. “All of the parts that are added to the recorded songs are my humming between lyrics,” says Barry, noting that everyone else in his camp is a “talented, pro musician” and that he trusts them to fill in the gaps—not that he needs much help.

Like all of his albums, High On 95 was recorded by Lance Koehler at Minimum Wage Studios in Richmond Virginia. And that’s because, by now, Koehler knows exactly how to record Barry’s performances. “it’s just one take,” says Barry, “Lance knows the more I do it, the worse it’s gonna get. You lose something when you play it more and more. So get it right.” And that’s exactly what Barry did. High On 95 carries the raw, emotional catharsis that’s become synonymous with a Tim Barry album. Every syllable exits his mouth with a fire propelling them, the kind of passion that can’t be forced or faked. Not that there was ever a reason to expect anything less.