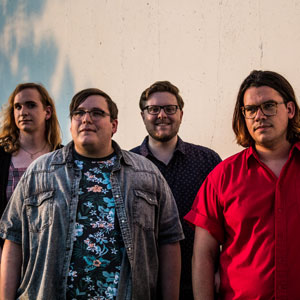 Tidal Volume is a band and pyramid scheme that started as a songwriting project for frontperson Zach Sullentrup but has blossomed into something much greater, at least in the band’s humble but undeniably biased opinion. Rooted in Missouri but always aspiring to venture further from home, Tidal Volume makes emotional, exciting pop rock to soundtrack our impending doom.

Their music is available nearly anywhere music is streamed or sold online, and they’ve narrowly escaped metaphorical death on numerous occasions, leading them to believe they’re destined to do this forever. Tidal Volume’s journey so far has brought them to stages across the Midwest to headline shows, play festivals, and open for noteworthy artists like Silversun Pickups, X Ambassadors, Plain White T’s, Jukebox the Ghost, The Wombats, Moon Taxi, Ludo, The Mowgli’s, Allen Stone, Lucky Boys Confusion, The Strumbellas, MisterWives, Parachute, Mt. Joy, and many more.

With graceful poise and graceless noise, Tidal Volume strives to continue creating songs about the human experience that are equal parts timely and timeless—all while wielding the confidence of a much more successful and talented band.