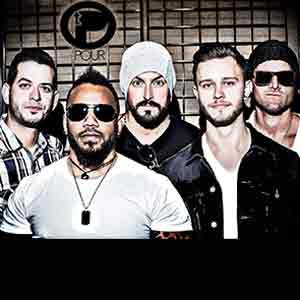 Saint Louis rock allies joined forces to form thePour, a modern alternative rock group. Members Jeff Lee (vocals), Chad LaRoy (drums), Brian Smith (bass), Jack Wiese (guitars) & Addison Bracher (guitars) are no strangers to the stage or each other, and with all their previous success, this union cannot be overlooked.

Lee and LaRoy first collaborated in the late 90s making their rounds in the St. Louis scene. Lee is a charismatic front man with vocals to match. Despite his talents, he exited the music scene for family life, yet continued to pen lyrics over the years. The call of the rock ‘n’ roll dream, however, was too strong for LaRoy to overlook. Along with Smith, LaRoy went on to enjoy chart-topping success with Warner/Reprise signed band Cavo.

In 2012, LaRoy set down the sticks and bowed out of Cavo. Hungry for new musical pursuits, LaRoy reunited with Lee, and they hit the studio. Other musicians played sessions with them, but the music produced was not what they had envisioned. They returned to a duo until deciding to invite Smith to bolster the band. Now three men strong, they started new and produced promising musical ideas. A mutual friend caught wind of their project and suggested adding Wiese to the roster. Not only is Wiese an adept guitar player, but a former lead singer to a well-established St Louis band “Brookroyal”—As the quartet wrote music together, they agreed to add a 2nd guitar player for more sound. Bracher fit the mold perfectly. The 5 piece using the moniker, “thePour”, to describe the effortless flow of their musical ideas. It suited them, and thePour is what they became. ThePour’s eagerly anticipated record release due out in 2017.