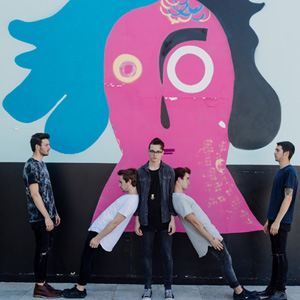 The band actually recorded their debut EP on a whim, alongside friend and engineer Andrew D’Angelo, when they were surprised with the news that a friend had been granted access to a studio for just a few days. With a total budget of $0, and only a week as a band under their belts, the group set out to record the best songs that they could in 3 days. After working ridiculous hours through the night, and to the next day whenever they could get in the studio, the 3 days were over and the EP was cut. Little did the band know, they were not even allowed to be in the studio that week. So through feelings of guilt and worry, they cleaned every bit of information of theirs from the studio computer, every crumb of Dominoes from the studio couch, and they were off with their entire EP on an hard drive in a backpack.

The homemade “We Are The Wrecks” EP was self-released in March 2016. After hundreds of spins on Sirius XM’s Alt Nation, and features on some of Spotify’s biggest rock playlists, the band signed to Another Century/Sony Music in December of 2016. Their debut single Favorite Liar broke the Top 40 on alternative radio, has over 6 million plays on Spotify, and spent almost a dozen weeks in the top 10 of Alt Nation’s Alt-18 Countdown. After signing their record deal, The Wrecks sought out to record a new EP in Los Angeles. 3 weeks into recording, and after blowing almost the entire budget, the band decided the music was going in the wrong direction and threw the EP away. “I just felt that we had strayed too far from the core of the band’s sound,” says frontman Nick Anderson. “It sounded like we were trying really hard to get on the radio or something, and I feel like that rarely gets you on the radio anyway.” So after getting their label and management on board, The Wrecks decided to move into Anderson’s grandmother’s house in his small hometown (Wellsville, NY) to work on the new record in a barn studio that their friend Patrick Barry owns. Co-produced again by Nick Anderson and Andrew D’Angelo, The Wrecks say their new upcoming EP “comes from a genuine place, and is something we’re all truly proud of.”