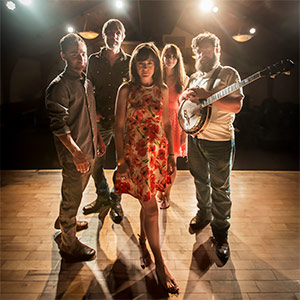 In 2013, only days after their debut CD release, backed by an impressive $10,000+ Kickstarter campaign, The Railsplitters performed at Rockygrass and earned the title of “Best New Band.” They would soon become a tried-and-true staple of the Colorado music scene

In 2015, The Railsplitters went full-time and released its second album, The Faster It Goes. Since then, on the strength of their material —which carries enough mesmerizing bluegrass to appeal to the purists, enough freshness to land on the official Spotify Indie Bluegrass playlist and enough pop hooks to crossover to listeners who’ve never bought or streamed a bluegrass album—The Railsplitters have performed at some of the most prestigious bluegrass (and not bluegrass) festivals in the country, including Delfest, Green River Festival, Salmon Jam, Grey Fox Bluegrass Festival and Rockygrass; toured the UK twice and have opened for or co-billed with The Steeldrivers, Trout Steak Revival, Noam Pikelni, Aoife O’Donovan, Milkdrive, Dustbowl Revival, Front Country and more.

The band’s fast rise from casual Colorado jammers to critically-acclaimed national artists can only be explained by their melodic songwriting, featuring compositions from all 5 of the Railsplitters, who all double duty on harmonies, their impeccable musicianship and the songbird-like vocal of lead singer Lauren Stovall, whose expressive phrasing, spot-on pitch and perfectly-controlled vibrato make a voice that is both instantly recognizable and a throwback to the classic country/rock era of the 70’s.