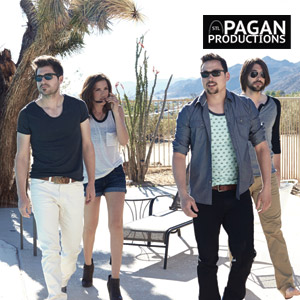 THE RAILERS
When brothers Jordan and Jonathan, raised in rural Missouri, met lively Arizona native Cassandra in the mountains of Flagstaff, Arizona, the foundation was laid for the adventure of a lifetime. All three classically trained students had plans of making the 2,600 mile journey to Music City to follow their dreams. But it wasn’t until an impromptu concert in Phoenix that the trio realized there was an undeniable blend between their musical styles. “The show was just supposed to be a farewell for our family and friends who had encouraged us individually to take a chance and move to Nashville to pursue country music. We had no idea that night would plant the seed of becoming a band. Everyone kept asking what our group’s name was, and it became obvious that we had something really special together,” says concertina player and vocalist Cassandra. So in January of 2002, the eldest brother Jonathan was the first to pack up his little truck and make the 28-hour drive. Cassandra followed suit 6 months later, with Jordan not far behind. For the next several years, they each paid bills by working various industry jobs, playing for several country artists including Sara Evans, Josh Turner and Lorrie Morgan. But it wasn’t until May of 2008 when they met the easy going Indiana drummer, Tyler Oban, that the story was set in motion.

After a couple years of fitting shows in between rigorous touring schedules and school, they reached a crucial fork in the road. On April 1, 2010 they all took a deep breath and a leap of faith, signing their names on a crumpled cafe napkin that said “September 1, 2010 or Bust.” Vowing to quit their jobs, and start their quest to becoming full time artists. “It was probably the scariest time in our lives, walking away from a steady paycheck and into the great unknown,” vocalist, mandolin and fiddle player Jordan Lawson said. But so far, it’s paid off. Within the first month of freedom, they landed an opening slot on Sara Evans’ Fall and Christmas tour. And shortly after that, another 60 show tour was booked with an Irish starlet.

More than 200 shows and 12 months later, they were sitting in the office of the President and CEO of Sony ATV Publishing. After two songs, he wouldn’t let them leave his office until a contract was in the works. By the next year, they were offered a major label record deal with Warner Music Nashville and show no signs of slowing down. By combining personal lyrics, air tight harmonies and earthy instrumentation using Mandolin, Violin, Concertina, and Acoustic Guitar and percussion, the group melts their energetic songs with classic groundbreaking styles of the Eagles, Fleetwood Mac, Dixie Chicks, Nickel Creek and Bonnie Raitt, leaving audiences with an undeniable sound and unforgettable live show.