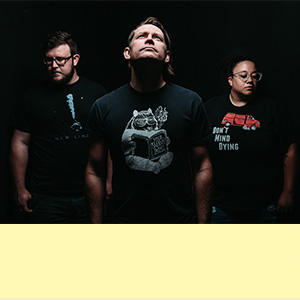 The Many Colored Death

with INNER OUTLINES, THE RICTERS
Friday, May 27, 2022
Duck Room
Doors open at 7pm
Show starts at 8pm
$10 in Advance/
$12 DOS
All Ages
$2 Minor Surcharge at Door (Under 21/Cash Only)
Get Tickets RSVP on Facebook https://the-many-colored-death.square.site/
COVID-19 Entry Requirements
Vaccination Proof/Test: Not Required
Mask: Optional
Set times:
The Many Colored Death – 9:45pm
Inner Outlines – 8:45pm
The Ricters – 8pm
Doors – 7pm
*Set times are approximate and subject to change
* * *  *
The Many Colored Death is a alt rock trio based out of Columbia, Missouri. Formed in 2010, the band has internalized the aesthetic and influence of acts such as Soundgarden, King’s X, Rush and Foo Fighters, then spun those elements out into a fresh new style. Described by one fan as “a silky mixture of 70’s rock and early 90’s grunge.”

Featuring a rhythm section that would make John Bonham and John Paul Jones proud, and a guitarist/vocalist who is equal parts David Gilmour, King Buzzo, and Chris Cornell, their brand of rock is both quiet and loud, dark and light. Soulful lyrics and melodies float effortlessly over the pounding surf of complex polyrhythms and groove laden riffs.

While the diversity and musicality of the band is showcased on their recorded works, the band truly shines in the live setting. With high energy and musical ferocity on full display, they’ve been making believers out of rock fans every time they take the stage. Whether opening for bands like Chevelle, Helmet, or Shaman’s Harvest, or shaking the walls down at a local dive bar, the song remains the same and the sound will shake your blood!