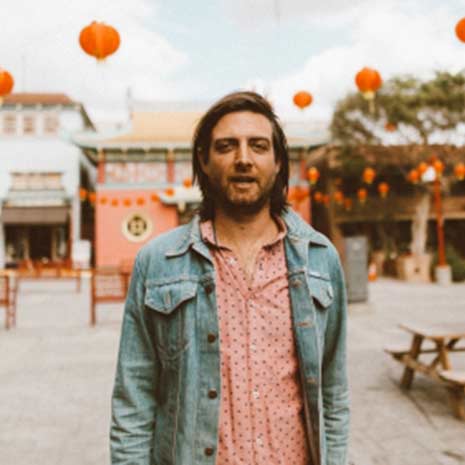 Based originally in North Carolina and now in Los Angeles, The Love Language was formed in Raleigh in 2008 by singer-songwriter Stuart McLamb. The band features a rotating cast of talented musicians who never fail to impress. McLamb has established his band as an extroverted community art project made by responsible citizens of a loosely packed scene who know that he will match whatever they contribute.

You may not be able to see the gorgeous landscapes behind Baby Grand, Stuart McLamb’s fourth record as The Love Language, but they’re so essential to the picture you’ll feel them in every note. Started in, of all places, a cavernous Virginia hammock factory, fragmentary demos came alive when splashed by sunshine during a move across the country to California, where the album was completed. “It was something just about being in a new city, and a new light,” McLamb says, “and reopening the sessions, and this demo that I thought was a throwaway, suddenly I’m really feeling it….” You can hear the freedom kick in when the backwoods country shuffle of “Castle in the Sky” explodes into a full-on aughts anthem, equal parts outstretched arms and pumped fists.

Yet so much lies in the shadows behind these tracks: other states, other lives, other dreams, other relationships—fogged over, perhaps, but there nonetheless. Yes, Baby Grand has its share of breakup songs—nobody writes those better than McLamb—but this time, even as something is being mourned, something else is being worked through; as lovers have been left behind, so have places and a time in life. Listen as the heartbreak and yearning of “New Amsterdam” come crashing down into the beautiful stasis of “Southern Doldrums” (the former was inspired by Cyndi Lauper and Joy Division, McLamb claims, while the latter draws upon John Cale’s meditative solo records), or as the beautiful lift of the startling sequence of songs that make up Baby Grand’s propulsive midsection gives way to a moody instrumental called “Rain/Delay,” a collection of distant plinks and plonks struggling to assemble themselves into melody. “I’ve embraced the idea that getting murky is what the band is,” says McLamb of the various assemblies of players and the various genre in uences that have fueled The Love Language at different points in time. “I love bands like the Ramones that have one thing that really works, and I love a good restaurant that serves one really good dish. But I get bored… I want this album to showcase different types of pop songwriting and structures.” The song “Juiceboxx” is what you’d get if Mick Jagger crooned his “Emotional Rescue” falsetto over a backing track by the Style Council, and “Let Your Hair Down” impressively suggests what “Caroline, No” might have sounded like if only it had been written by George Michael.

But it’s the finale that sends Baby Grand into the stratosphere. With Raleigh in his rearview, McLamb dusts off the ’60s throwback sounds of The Love Language’s 2009 self-titled debut, which are all over the flat-out-perfect “Independence Day.” And somewhere around New Orleans, he resuscitates those irresistible singalong melodies from 2010’s Libraries on “Paraty,” the lovely paean to a South American town he never managed to visit. Maybe it’s Austin, or Phoenix, that finds him slipping into the sleek suit of ’80s synths that underlay 2013’s Ruby Red—“Shared Spaces” should be listened to on a boat while wearing a skinny tie and shoes without socks—but then the wide-open vista of the California desert opens up before him, sunny and flat and full of promise, and that’s “Glassy.” It’s gotta be close to the best thing McLamb has ever written, and it culminates this alternately ruminative and riotous record on, fittingly, a note of re ection: “We’ll be riding out this losing streak,” he sings, “and they say the tides are rising / It took
a long time to get us where we can’t come back…” You can’t leave something behind without starting something new, and the inverse of that proposition is just as true: when you stand on the Pacific coast, squinting into the sunset, there’s an entire country at your back, unseen but ever-present, and it stays with you forever.