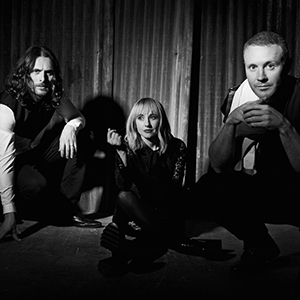 with CUFFED UP
Tuesday, November 1, 2022
Duck Room
Doors open at 7pm
Show starts at 8pm
$23 in Advance/
$25 DOS
All Ages
$2 Minor Surcharge at Door (Under 21/Cash Only)
Get Tickets RSVP on Facebook https://www.thejoyformidable.com/
COVID-19 Entry Requirements
Vaccination Proof/Test: Not Required
Mask: Optional
Set times:
Show – 8pm
Doors – 7pm
*Set times are approximate & subject to change without notice.
* * * *
The discography of Welsh alternative rock band the Joy Formidable consists of three studio albums, one live album, three extended plays and 15 singles. Their debut extended play, A Balloon Called Moaning, was released in December 2008, followed by their debut studio album, The Big Roar, in January 2011, which reached No. 31 on the UK Albums Chart, and produced the singles “Whirring” and “A Heavy Abacus”, which reached No. 7 and No. 25 on the US Alternative Songs Chart, respectively. Their second studio album, Wolf’s Law, was released in January 2013 and reached No. 41 and No. 51 on the UK Albums Chart and the US Billboard 200, respectively. Their third studio album, Hitch was released in March 2016. Their fourth studio album, AAARTH, was released on 28 September 2018.