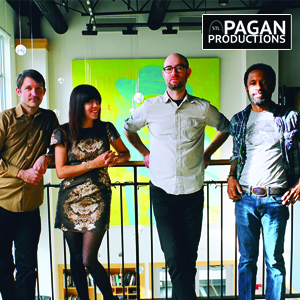 Omaha, NE’s The Good Life returns this summer with their first album in eight years, Everybody’s Coming Down. Call it a soundtrack to Man’s 21st century existential angst, the album poses cosmic queries, contemplates regrets, questions self-worth, and examines the possibility of living in the moment, when memories are all that we truly take with us. And in some ways, that’s the sweet spot front man and lyricist Tim Kasher inhabits: trying to make sense of this world of ours, and how and why we navigate it the way we do.

Everybody’s Coming Down moves in a new direction musically and, in contrast to The Good Life’s earlier releases, is very much a rock record. It is also the first that truly embodies the band as a whole, more so than any previous album. In blending elements of drummer Roger L. Lewis’s love of classic rock, multi-instrumentalist Ryan Fox’s chaotic approach to melody, Stefanie Drootin-Senseney’s propulsive yet tuneful bass parts, and Kasher’s deft, complementary song writing, the band sparked a vibrant evolution in sound. The gentler, folk-driven pop/rock for which the band is beloved remains (sonic sister album bookends “7 In The Morning” and “Midnight Is Upon Us;” “The Troubadour’s Green Room”), but it is now mixed amongst guitars lines that unspool in a blaze across songs that hit harder and more viscerally (“Everybody,” “Holy Shit”), as well as moments of distorted psychedelia and moody ambience (“Flotsam Locked Into A Groove,” “Diving Bell,” “How Small We Are”).