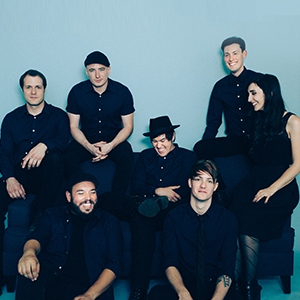 The brainchild of McCormick, The Family Crest was started as a recording project in 2009 with co-founder John Seeterlin (bass). “We were in another band and had become disillusioned,” explains McCormick. “John and I were actually planning on leaving music at that point because we wanted something that in ten years we could be proud of.”

Instead of leaving music, they set out to reinvent how it could be created, starting The Family Crest. “We always liked making music with people — getting a bunch of people together and singing. So we put ads everywhere,” says McCormick. “We posted on Craigslist and emailed old friends from school.” The outcome was greater than the original duo imagined, with 80 people credited on the first recording the band produced. From that a band emerged, at the urging of the guest musicians, who wanted to hear the songs performed live. “We’ve worked with a lot of conservatory students as well as people who just sing in the shower,” McCormick adds. “It became a lot about giving these people a chance to express themselves without being locked into a commitment.”

The result is a seven-piece core band boasting over 400 “Extended Family” members who have contributed to the music. The Family Crest released its album Beneath the Brine in February 2014 and, just with its previous recordings, the San Francisco band set out to capture a plethora of instruments — including bassoon, vibraphone and French horn — in unique places, such as living rooms, churches and cafes across the West Coast.