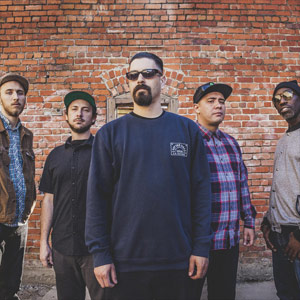 For more than a decade, U.S. reggae artists have been building a foundation from the Hawaiian islands to the east coast. This new generation of reggae artists continues to reach new heights of success with album and ticket sales, as well as winning over fans worldwide. While most modern American reggae bands are rooted in the rock reggae style, there are a few U.S. artists championing the lineage of classic roots reggae traditions, and Los Angeles-based vintage reggae revivalists The Expanders are leading that charge, building their sound around classic 70’s and early 80’s style reggae, with three part vocal harmonies, conscious songwriting, and an indie-DIY spirit.

The five-piece band comprised of John Asher (Drums, Vocals), John Butcher (Guitar, Vocals), Roy Fishell (Organs), Chiquis Lozoya (Bass, Vocals), and Devin Morrison (Guitar, Vocals) have been making reggae fans and critics take note with their refreshing sound that references the “golden era” of reggae. Morrison and Butcher grew up listening to the record collection of famed reggae archivist Roger Steffens, and credit much of their love and knowledge to the accessibility and education of those experiences. Becoming friends with Steffens’ son, they developed an obsession with exploring the deepest reaches of the genre. The Expanders’ new album Hustling Culture was released June 16, 2015, on indie tastemaker label Easy Star Records. Hustling Culture is the band’s third studio album, but for the band members feels like their first proper album as a cohesive unit. Asher explains, “Our first album was a collection of music from good friends making a record together. Our second album was a great covers album, but Hustling Culture is the band coming into its own with our songwriting and musicianship.” Morrison adds, “For this album we spent more time prepping and rehearsing, giving us more confidence in the recording studio. The result made the process more fun and enjoyable as we approached the songwriting in a more organized way and explored a wider range of topics than on the first album. Our combined efforts really shine through and all the musicians really stepped up and gave an inspired effort on the whole record.” In addition to the core members, their extended family includes keyboardist Roger Rivas of The Aggrolites and Rivas Recordings. Rivas has been an integral part of The Expanders’ recordings and helped maintain and produce the authentic sounds, which shine through on all the band’s releases.

Hustling Culturewas recorded entirely on analogue tape at Killion Sound in North Hollywood, CA, from 20122014. The studio is a favorite recording place for the band because it’s run by Sergio Rios (Orgone), a friend who understands their unique aesthetic and has the gear to capture it, giving the album a warm and colorful palette.

The album title, Hustling Culture comes from the album’s opening line: “One dollar gone but the next soon come, we never stop from hustling culture.” Morrison explains, “Everyone has a hustle, and ours is roots & culture music. It’s a way of reminding ourselves that outside of just entertaining and financial gain, there is a bigger picture and larger purpose for writing about the topics and playing the style of roots reggae that we do.” The Expanders’ music is a reminder that reggae music wasn’t born in a tropical beach paradise, but in the impoverished and underprivileged areas of Jamaica, resulting in a passionate expression for human rights, social justice and freedom from oppression.

There is a subtle, yet powerful conscious thread woven throughout Hustling Culture. “ Uptown Set,” for example, is about the hidden effects of our country’s party lifestyle, which brings suffering and misery to innocent poor people caught along the routes where party drugs come across the border. “Thanks For Life” is a dedication to women, the struggle they face every day, and the debt of life that we all owe to them. “Top Shelf” is a tribute to the ganja farmers and the reflection of the changing cultural views on marijuana.

The band is part of a burgeoning Los Angeles reggae scene that sprang in large part from The Blue Beat Lounge (the longest running weekly ska night that happened at the Knitting Factory) and LA’s longtime premier weekly reggae night Dub Club held at the Echoplex. A song that was inspired by a key member of that scene is “Reggae Pops,” an infectious instrumental tune laid over a “steppers riddim” featuring John Butcher on lead guitar and Dan Hastie from Orgone on clarinet. The title was chosen as a tribute to the late-great Reggae Pops (born Nemencio Jose Andujar) who was a pillar of the Southern California reggae community for decades. Morrison states, “It’s impossible to accurately describe what he meant to reggae music in Los Angeles, but those who remember him from shows will never forget him. He was a dancer, a fan, and a presence that was always felt. He was the man!”

The Expanders are on tour now supporting the release. Morrison concludes, “Our goal is to bring that vintage reggae feel and sound that we love to places where people might not get to hear it on a regular basis.”