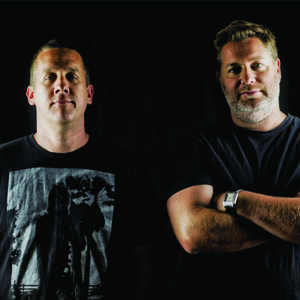 Jay Larson:
Jay Larson is best known as a stand up comedian with multiple appearances on The Late Late Show, four appearances on Conan and his own half hour special on Comedy Central. Jay’s style is completely original and his ability to connect to an audience through storytelling is unmatched. As a storyteller his “Wrong Number” story went viral after climbing to #1 on Reddit and was also featured on “This American Life” with Ira Glass claiming, “Perfect Comedy, Perfect Storytelling…” Jay’s Story telling has also been featured on Comedy Central’s “This is Not Happening.” Jay’s first album, “Self Diagnosed” was released in 2011 by AST records and his follow up album, “Human Math” is set to release in the fall. While stand up is his first love Jay wears many hats and recently co-hosted two seasons of “Best Bars in America” for the Esquire Network. He also has a role in the highly anticipated second season of Twin Peaks, set to air on Showtime in 2017.

Ryan Sickler:
If the adage is true — that tragedy plus time equals comedy — then Ryan Sickler has paid his dues on the left side of the equation. Born in Baltimore, Ryan lost his father when he was 16. After that, he bounced from one relative to another. And while his early years might have seemed rocky, that tumultuous childhood gave him both fodder for material and armor against the relentless onslaught that is life as a standup comic.
His television appearances include The Pete Holmes Show, Comedy Central’s Tosh.O, Live At Gotham, Cutman and The Late Late Show.