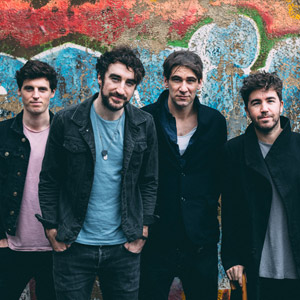 With five critically-acclaimed albums to their credit and almost a decade spent touring all over the world, The Coronas have earned their place as one of Ireland’s best loved and hardest working bands. Their fifth and latest album, TRUST THE WIRE, debuted at #1 on the Irish music chart in its first week of release in the summer of 2017, becoming the band’s first album to reach the top spot. After achieving that lofty milestone, The Coronas–Danny O’Reilly (vocals, guitar), Graham Knox (bass), Conor Egan (drums) and Dave McPhillips (guitar)—proceeded to take their music directly to audiences everywhere, performing shows in Europe, the United Kingdom, Australia, Canada, the United States and even Dubai, bookended by massive concerts in their native Ireland.

This is heady stuff for a band whose career began playing in student clubs. Most recently, they sold out Dublin’s Royal Hospital Kilmainham–capacity 15,000–where they entertained their largest headline audience ever. This year they will headline Ireland’s largest indoor concert venue in addition to playing an array of summer festivals around the island. But this time around, festivals are also on the schedule for the U.S. After completing a short series of dates in February, The Coronas will return to North America in late summer for some six weeks of shows, including the eclectic Lollapalooza Festival in Chicago’s Grant Park and other high profile music events.

The Coronas’ Danny O’Reilly and Graham Knox have known each other practically since their birth which was just two weeks apart. Their parents were friends, and essentially the pair grew up together. They met Conor Egan at Terenure College secondary school in Dublin where, in 2001, they formed a band called Kiros with O’Reilly on vocals and guitar, Knox on bass and Egan on drums. Kiros morphed into Corona–the name taken from the Smith-Corona typewriter in Cameron Crowe’s classic film about the music business, Almost Famous—and ultimately, The Coronas. The lineup was finalized in 2006 with the addition of Dave McPhillips on lead guitar.

The Coronas’ debut album HEROES AND GHOSTS was released in 2007 via the independent Irish label 3ú Records, its success fueled by the single San Diego Song that set Irish radio ablaze. Then came sold-out shows throughout Ireland and support slots with Paul McCartney, The Script, Justin Timberlake, Pink and many others. The albums TONY WAS AN EX-CON (2009) and CLOSER TO YOU (2011) followed, also on 3ú Records.

A turning point came in 2013 when the band essentially left home, lured away to London after signing with Island Records. The following year, they released THE LONG WAY, produced by Eliot James (Kaiser Chiefs, Two Door Cinema Club), but the major label experience left them disillusioned and disappointed. More determined than ever to drive their own destiny, the band returned to Ireland to write and record TRUST THE WIRE and release it on their own label imprint–So Far So Good Records.

From its tightrope-walking title to the content of its lyrics to its bold production, TRUST THE WIRE brims with the band’s newly-reenergized self-belief, capturing the focus they found in leaving home, the fresh perspective it gave them and a soaring maturity in their songwriting. A decade on from their recording debut and surpassing their teenage dreams, it’s no surprise that The Coronas are surer of their strengths and readier to take risks.

“So much happened that changed us as a band,” recounts singer Danny O’Reilly. “We had to ask ourselves why we do this and what’s important to us. Our motivation had always been to make music that we love and keep improving. Maybe we’d lost sight of that. We had to step aside to refocus, and in doing that, we got our ambition back.”

After writing the songs for TRUST THE WIRE while locked away in an isolated house on the west coast of Ireland, The Coronas returned to London and Notting Hill’s Eastcote Studios to record once again with producer Eliot James. “It’s the first time we’ve used the same producer twice,” says Danny. “We love Eliot’s ideas. There’s a trust between us. He knows that we’re prepared to push the boundaries and how to help us do that. There were songs on THE LONG WAY that introduced synths and new sounds, and we wanted to continue with that, but take it further.”

As a result, TRUST THE WIRE fizzes with ambition, often in ways one wouldn’t expect from a band famed for their audience sing-alongs. Acoustic guitars still feature, but take a back seat to synths and organs. There’s both a subtlety and a stately grandeur to songs that now swell in size and scope, rather than bound straight to big. And the lyrics are as searingly honest as ever, but they are more intimate and inward-looking than before.

“Several of the songs reference what happened to us over the last three years,” says Danny. “It would be dishonest not to mention it. Of course, there are also relationship songs; however, they’re as often about relationships within the band as with other people. But whatever our songs mean to whoever hears them is fine by us. If you think they’re love songs, so be it.”

TRUST THE WIRE confirmed that The Coronas were right to trust their instincts, and it has brought their burgeoning audience beyond Ireland into sharper focus. With singles from TRUST THE WIRE making inroads at U.S. radio for the first time and a string of sold out North American shows, their music is becoming more recognizable, making it necessary to once again leave home. “We can’t wait to get out on the road again,” says Danny. “We’ll be packing the van and traveling all over, building things up to the next level in different territories. Luckily for us, we love traveling together.”