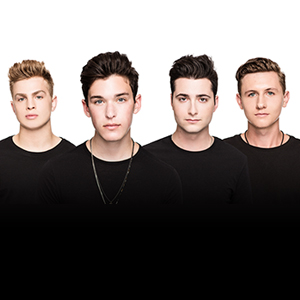 The Los Angeles based Pop-Alt Rock band The Catching features lead singer and bassist Holden Glazer, guitarists Jake Farbman and Evan Hemwall & drummer Drew Stevens. The band draws inspiration spanning decades of rock and alternative music, citing The Beatles, Kings of Leon, and Green Day as some of their major influences. Their carefully crafted style is highlighted by a sonic palette of polished guitar hooks, Holden’s rock-based vocal rasp, a driving low-end coupled by a booming backbeat. The band has toured extensively during the past two years, performing over 200 shows across all national markets and has a growing social media following.

The members met at a young age while performing together in local New Jersey music programs, and quickly realizing they shared amazing chemistry and a common vision, this group of talented musicians began collaborating on writing original music in 2014.

From there, the band cultivated their sound in the local Jersey music scene, playing many gigs to tighten their live sound. Eventually, the band hit the road in 2016 and extensively toured the United States supporting their earlier music (“Wild Ones” from their first EP) and participated in tours including High School Nation and the Digitour.

Moving into 2017, the band entered the studio with renowned producer Matt Squire (Panic! at the Disco, All Time Low, Katy Perry) to further develop their sound and record new music. These sessions resulted in three successful pop/rock singles, “Do It All Again,” “Get Even,” and “Lock That Door,” all of which were released in spring of 2018.

Most recently, the band recorded a new EP with producer Dylan McLean in the Calabasas, California studio of John Feldmann. Throughout 2018, the band toured extensively in support of alternative bands Vinyl Theatre and Anarbor, and is positioned for more touring and recording moving into 2019.