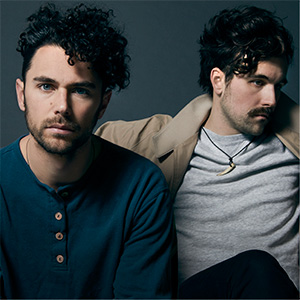 The energy, focus and inspiration Paul Wright and Tim Harrington are harnessing in 2018 feels like a rebirth. Having amassed over 130 million streams worldwide, the duo of TALL HEIGHTS are currently on their biggest winning streak, touring the US and Europe alongside acts like Ben Folds, CAKE, Judah & the Lion and Colony House, and racking up accolades across the press world from the likes of Paste, SPIN, Huffington Post, NPR and Stereogum, in addition to making their broadcast performance debut on Conan. With no plans of slowing down anytime soon, Tall Heights now gear up for the release of their most ambitious project yet, sophomore album Pretty Colors For Your Actions. Stepping away from the production-heavy, synthetic palette of earlier releases, Pretty Colors For Your Actions is a uniquely original record that melds man-made instrumentation with grandiose, contemporary production.  The highly-anticipated album is just the start of a huge fall for the group, who will then take their newly-released music across North America for 30+ headlining tour dates beginning this October.