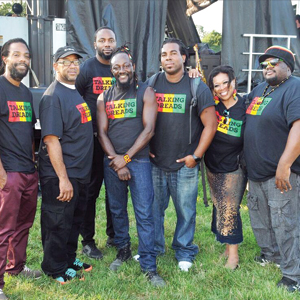 Talking Dreads began as a project born from the audacious notion that hardcore Heads-lovers wouldn’t mind a tinkering or two with their favorite Talking Heads tunes, and there is a lot of great music here that will make you stop, listen and smile a little bit more as you’re grooving along to the joyous rhythms and jubilant spirit of the island vibe.

Talking Dreads is the brainchild of Head Dread, Mystic Bowie, a Jamaican artist whose long and close relationship with Chris Franz and Tina Weymouth, founding members of Talking Heads and Tom Tom Club, began when he joined the latter group as a singer in 1996. He then recorded and performed with Tom Tom Club for nearly twenty years and continues to bear fruit from their unending collaborations.