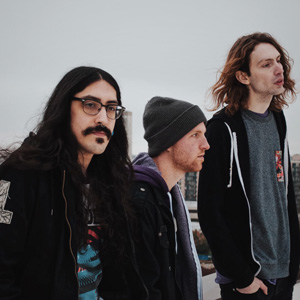 Synthetic Sun is a high-energy Indie Rock band with a hint of Post-Punk from St. Louis, Missouri.

Started in 2014 as a solo project by Nick Geller, recording demos in his basement in St. Louis. Mikey Peterson joined on drums not long after. The vibes were right, and after preparing an album, they set off to Encapsulated Studios in Maplewood, MO, to record with Gabe. The debut album ‘Everything is Terrible,’ a searing hot rock album, was released January 2016.

Shortly after hearing that album, Jandro Montero joined the group on bass. The band became a revolving door of lead guitar players for a while. Foraging into a new sound, more angsty and gritty than before, they released ‘Avoiding Real Life Completely.’ The album was recorded by Michael Girard at Graveless Studios in St. Louis and released early January 2018.

In 2019 Synthetic Sun found themselves without a lead guitar player, and decided to stay a three piece band. Exploring a more stripped down sound and reflecting in their post-punk roots, they wrote ‘Not Having a Good Time.’ Dropping January 3, 2020, the new EP sets out to redefine the sound of the band and solidify the line up with renewed vigor. Check it out on all streaming platforms!