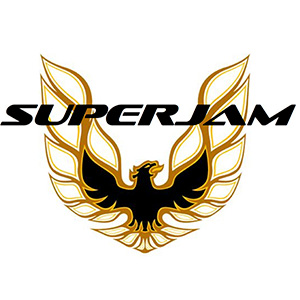 SUPERJAM. The word invokes the glory of a bygone era. A time when the Rock was so immense only stadiums could contain it. A time when a bad seat mean’t you probably weren’t going to see anything at the show except a cheap beer and some shirtless girls. And that was fine.

SUPERJAM. The name of a mighty quintet of St. Louis rockers-nay-dreamers, who dare to dream that they can bring back those heady days of yesteryear. Bring back screaming guitars and killer rock poses! Bring back racks of keyboards and questionable fashions! Bring back ear splitting vocals and soul crushing bass! Bring back senseless drum solos! Bring back lava lamps and black light posters! SUPERJAM! A blinding beacon of light in a dark world of oppressive monotony…

Featuring spectacular re-creations by artists such as:
Boston, STYX, Journey, Foreigner, REO Speedwagon, The Who, Toto, Supertramp, Manfred Mann, April Wine, Shooting Star, .38 Special, Eddie Money, Night Ranger, Steve Miller Band……and many, many more. Starting to get the picture? We knew you would.