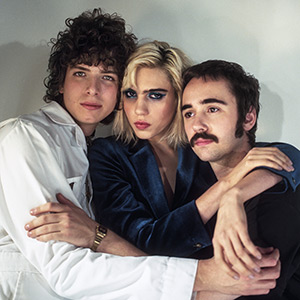 All three band members will in fact be 22 when Twentytwo in Blue is released in March of 2018, almost two years and two months after Sunflower Bean’s hazy, charming debut LP, Human Ceremony. They were two momentous years in which the trio toured the world several times over and grew in accomplishment, discovering a newly confident voice they bring to the second album, one that doesn’t shy away from the political changes and cultural shifts that have left America and the world stupefied. “This has been such an unbelievable time,” says Kivlen. “I can’t imagine any artist of our ilk making a record and not have it be seen through the lens of the political climate of 2016 and 2017.”

While Sunflower Bean remains a guitar band at its core, new and gentler textures were welcomed this time around. “What we’ve figured out since Human Ceremony is that we did a lot of the rock stuff, and this time it just felt right to explore the sweeter side, and dive deep into that,” says Faber. For her part, Cumming is truly singing like never before, on the sublime “Memoria” and “Only a Moment”. “I think before I was a little afraid to show myself as a singer, even to my band mates,” she says. “I think if anything, after making this we’re the most well-rounded we’ve ever been.”

Once again, the band collaborated with longtime producer and champion Matt Molnar (Friends) and engineer Jarvis Taveniere (Woods), while new to the creative team this time was co-producer and mixer Jacob Portrait (Unknown Mortal Orchestra). “I think with this we just wanted to dig deep into the songwriting process and really just try to focus on crafting these songs,” says Faber. “And also having the record just sound really incredible.”

If there was a ragged beauty in the gauzy, groovy wall of sound of Human Ceremony and its predecessor, the 2015 EP Show Me Your Seven Secrets, there’s a new directness to these songs, a product of Sunflower Bean’s own maturity and the insanity of the times we’re in. Twentytwo in Blue is a record made by millennials in solidarity with their own—the most progressive, even revolutionary generation we’ve ever seen. “I think we all really want the record to be lovable,” says Cumming. “I want the songs to be something that someone can get attached to. Because that’s what I look for in songs myself, and that’s the kind of experience we want to give to others.”