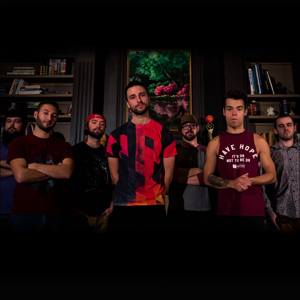 Stacked Like Pancakes are bringing the V.I.Pancake experience back!!!
First 20 ticket holders will get half hour early entry to their show. Hang out with the band and eat pancakes! 😋🥞
Ticket holders will be contacted by email prior to the show. Get tickets NOW!

Reinvigorating the sounds of classic ska, Stacked Like Pancakes (SLP) piles on boisterous horns and punk rock attitude to create high energy music synthesizing the vibes of Reel Big Fish, twenty one pilots, Foo Fighters, Paramore, Cage the Elephant, and an untraceable amount of other artists and genres. Since 2007, SLP has shared the stage with national and international acts, toured on the Vans Warped Tour, headlined their own self-booked tours, released their latest crowd-funded 15-track monster-album THIS IS US in December 2015, and in 2016 went on the road with Reel Big Fish for a month-long nation-wide syrupy tour.

The token with this group is their live performance. Concert venues and music patrons alike should be prepared for the stage to shake, the crowd to be wild and unpredictable, and the show to be a deliberate fusion of spontaneity and precision. Their community fan base – the #PancakeNation –  is hungry for their band to grow. Stacked Like Pancakes epitomizes a tough DIY band despite a meaningless band name, and are rightfully on the rise to claim an international stage of their own.