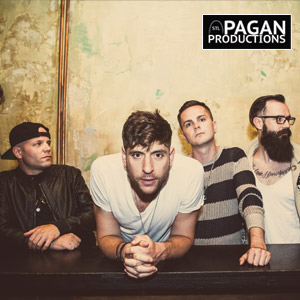 It started with a homemade computer. Filled with dust and dirty beats, the machine hadn’t connected to the Internet since Silicon Valley was a private practice in Beverly Hills. Yet from it emerged Spirit Animal: a chaotic combination of rock and pop, fueled by the unruly aesthetics of psych and funk.

Explosive singer Steve Cooper, drummer Ronen Evron, bassist Paul Michel, and guitarist Cal Stamp created a stir with their debut EP, ‘This Is A Test,’ and a pair of tracks — “The Black Jack White” (which surpassed 1 million spins on Spotify) and “BST FRNDS” — that appeared on mtvU. With hype rolling in from Interview, Entertainment Weekly, Earmilk, and Consequence of Sound, the band returned with 2016’s ‘World War IV’ via Wind-up Records. The band’s single, “Regular World,” attracted early radio airplay and support from Spotify’s New Music Friday and Apple Music’s A-List and Ones to Watch playlists.

“It’s like…much bigger,” Cooper says of the forthcoming release. Spirit Animal has re-imagined its sound with body-rocking riffs and contagious choruses that burst at the seams. “Everything that was wild is more wild. Everything that was heavy is heavier.” The ultimate message, however, still serves the same purpose: to bring the party to the people. “It’s always supposed to feel good,” Cooper adds. “It’s always moving towards euphoria.”

Drawing on a range of early rap and trip-hop influences — think Tricky, Outkast, El-P — and the songwriting of greats like the Talking Heads and Tom Petty, Spirit Animal tears apart what you know and love about your favorite style and rearranges the pieces. Their new track, “Regular World,” kicks off with soaring “ooh’s” and a poignant funk verse before crashing into a climactic chorus that celebrates our insatiable thirst for the not-so-regular. “It’s the plotting and scheming for the next thing — and doing everything in your power to get it — that inspires us,” says Cooper.

Spirit Animal is a dish best served live, with the boys flashing moves like Jagger that demand audience participation. The arena-ready antics of the Red Hot Chili Peppers, the personality of James Brown, and the modern pop charm of The 1975 combine to make your inhibitions disappear quicker than ten tequilas.

“Big Bad Road Dog,” another ‘World War IV’ standout, sums up Spirit Animal to a tee, painting the picture of a nebulous force that leaves a fun-fest of destruction in its wake. You don’t know whether to run for your life or try to hitch a ride. We suggest you do the latter.