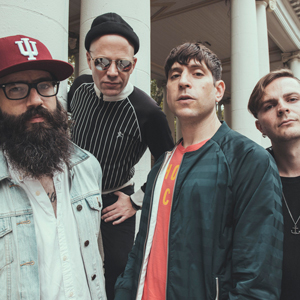 As much as music should outlast the times, it should also speak to them.

On Spirit Animal’s 2018 full-length debut, Born Yesterday, the band not only proves 808s and guitars can coexist in harmony, they also craft airtight songs that would delight in any era. Hailing from Brooklyn, NY, singer Steve Cooper, guitarist Cal Stamp, drummer Ronen Evron, and bassist Paul Michel make music that both bottles and transcends the moment.

The band’s backstory begins in 2013 with “The Black Jack White,” a single that quickly topped a million plays on Spotify. Building a buzz, the foursome landed looks from Consequence of Sound, Entertainment Weekly, and The Washington Post.

2016’s World War IV EP yielded the staple “Regular World,” which clocked over 2.9 million Spotify streams. They toured relentlessly along the way, developing a diverse and devout audience. Signing to Atlantic Records in 2017, the band wrote and recorded what became Born Yesterday at Steve’s apartment, as well as studios in New York, Los Angeles and Nashville.

“We want this album to stick with you, but we also want it to be fun” Cal says. “It’s more than just a good time, but it shouldn’t feel like more than a just good time.”

The album’s first single, “YEAH!” pivots between sparse pop verses and a wild, distorted chorus. The lyrics are at turns pointed and irreverent. The song, like the band itself, is fresh and unpredictable.