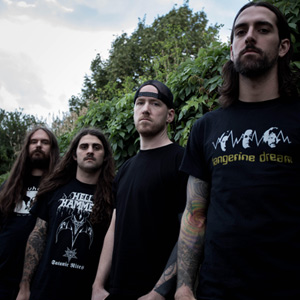 While Spirit Adrift made many take notice with their debut album “Chained To Oblivion”, it is on “Curse Of Conception” their stellar second album, and first with new label 20 Buck Spin, that the band has taken a giant leap forward in songwriting prowess, production and confidence. From the Metallica / Priest like opening moments of ‘Earthbound’ to the epic closing of “Onward, Inward”, Spirit Adrift are aiming sky high with burning focus and peak vigor.

The aforementioned ‘Earthbound’ is a standard bearer for album-opening songcraft, leading into the colossal title track, a grungy and twisting radio-ready crawler. ‘To Fly On Broken Wings’ & ‘Graveside Invocation’ continue to show that any of the eight tracks on ‘Curse Of Conception’ could stand as featured singles. Throughout the duration brick heavy riff assembly, somber southern atmospherics and grand melodies entwine flawlessly into perfect metallic majesty, exemplified succinctly and totally in the instrumental ‘Wakien’ for example.

With a host of fantastic albums released by their contemporaries lately, Spirit Adrift has taken their craft to an ascendent new level on ‘Curse Of Conception’ earning their rightful place among the top tier of modern metal bands clawing their way above and beyond the underground scene. Now more than at any time metal has become the lifeblood of rock music and Spirit Adrift offer ‘Curse Of Conception’ as an embodiment of that perseverant vitality.