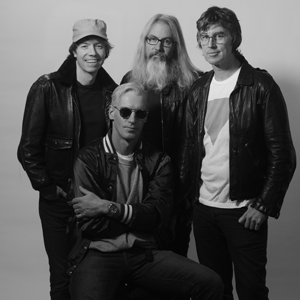 AN EVENING WITH SLOAN

Yes, there’s another Sloan song called “If It Feels Good Do ” Murphy’s boogie-woogied jam “Don’t Stop (If It Feels Good Do It)”—another older song salvaged for the new record—may share its parenthetical name with Sloan’s Pentland-penned 2001 hit single, but as he claims, “I had my ‘If It Feels Good Do It’ song before Patrick had his, and we just decided at the time that his was better!” (NOTE: Pentland disputes this account of events.)

This time, it’s personal. In recent years, Pentland has become more open about the anxiety and panic attacks that have plagued him as a performer. On Sloan12, he channels those experiences into two of the album’s most rousing songs, “The Day Will Be Mine” and “Have Faith,” both of which use amped-up riffs and huge hooks to burrow a path from darkness to light. “Depression and anxiety were definitely on my mind when I was writing those songs,” he “Both are basically about desperation— something has to change or this is not going to have a happy ending.” And while Scott is known for trading in surrealist imagery and cryptic wordplay, the psych-folk sway of “Gone for Good” chronicles the breakdown of a friend’s marriage in the wake of an illicit affair. “It’s written in the spirit of [Twice Removed’s] ‘People of the Sky,’” he says. “As in: non-fiction.”

Now, about that Gord Downie line. As 12 eases you into its comedown closer, Scott’s “44 Teenagers,” the song’s cosmic-rock spell is momentarily broken by one particularly eye-opening lyric about a certain late Canadian rock icon. “Just the other day I was reminded of the many ways Gord Downie died/ I see a kid in my head who will be seeing red, until his anger yields to pride,” Scott sings with laissez-faire élan. “That song was deliberately written as an ode to the teenager,” Scott explains. And part of that, he adds, involves examining how teenagers process trauma. “The line isn’t so much about Gord passing, but about feeling sad for his teenage son who just lost his dad. And not suddenly— but in a terrible, protracted kind of When I was 14—the same age my son is now—my dad dropped dead in front of me from a massive heart attack. He was just 48 so you can perhaps imagine what the years leading up to that number have been like for myself.” For Scott, this wasn’t purely an exercise in speculative songwriting from an emotional distance—not only did he and Downie know one another, Scott’s teenage daughter and Downie’s son are actually schoolmates. “There are many layers to the lyrics that hit home for me in a very real way,” Scott says. And besides, knowing Downie’s healthy appreciation of subversive humour and absurdity, “I think he would’ve loved the tribute.”

Sloan are still here to serve you. On the surface, Ferguson’s centerpiece track “Essential Services” seems like another joyous display of the band’s consummate craftsmanship, using a bouncy “Mr. Blue Sky” piano line as a trampoline for some sky-bound CSNY-worthy harmonies. But couched within its ecstatic sound is a poignant statement of purpose. Says Ferguson, “Chris thought the song was a fun way of referring to our band, being an essential service—we can’t go away! The song touches on that aspect of our The chorus—‘essential services are counting on you’—refers to ourselves, but also the ‘you,’ meaning our audience and how we count on them to support and continue with us. They’re part of the equation as well. Does that sound too corny to say?” Hey, if it feels good, do it.