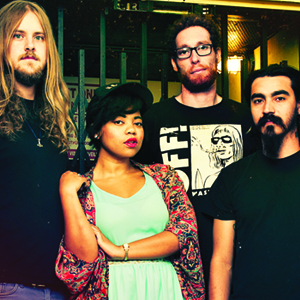 On her own, lead singer A.J. Haynes is a force—in another era, she might have sung about strange fruit. But the magic of Seratones is completed with the devastating trio of Conner Davis, Adam Davis and Jesse Gabriel. These dudes have been working together on-and-off for years in different projects and incarnations of projects and one-off projects. Take your pick: Noids, Sweaty Cleopatra, AJ + Monkey Bizness, Don’t Forget Your Dinosaur, Thrashosaurus Wrecks, Spreekiller, Sunday Mass Murder- many more, but between Adam, Connor, and Jesse they have created Rock’n’Roll in almost every conceivable flavor. If they had come together earlier, they might not have gained the chops or the experience or whatever it is (probably some obfuscated and annoying German word) that rips across the Seratone’s first demo, “Don’t Need It”. This is a song that demonstrates just how far they have come as musicians. It is a song that feels NEW. Refreshingly new. One could point out influences and similarities to other bands, but they fail to elucidate the Seratones sound.

Sure, Connor’s guitar work might sound like this or that guitarist’s work, but Connor’s work is only given its full due against the backdrop created by the bass and percussion provided by Adam and Jesse. A.J.’s voice draws obvious comparisons to many a great singer, but none of them were singing over, or even with, the pounding rhythm of her band—they play with an awareness that lets them not just keep the beat, but drive the song forward at an almost frenetic pace, keeping their sound always on edge…as if something is bubbling just under the surface waiting to explode.