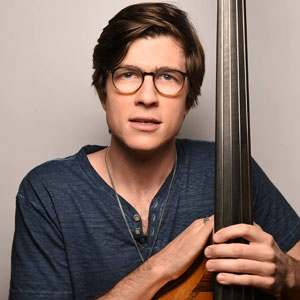 “Scott is a masterful performer, taking the upright bass to a totally new level. You’re tricked into thinking most of the songs are an ensemble but with just Scott you get the rhythm, melody, percussion, and vocals… all layered perfectly together. He’s the modern day ‘One Man Band’.” – Eric Marcum, WSM RADIO

As a teenager growing up near Houston, Texas, Scott Mulvahill picked up the bass guitar on a whim. Natural talent and the lure of a challenge drove him to be the best musician he could and discover his love for singing, songwriting, and the upright bass.  After attending college at North Texas State University, Scott moved to Nashville, where his life changed after meeting American music icon Ricky Skaggs and joining his Grammy-winning band, Kentucky Thunder.  He toured with Ricky for over five years, and in that time, first started writing songs on his upright bass.

Scott describes his experience, “I started music as a bass player, but when it came to singing and writing songs, all my favorite writers played guitar or piano, and I just figured I had to as well.  But while in Ricky Skaggs’ band, I started performing ’20/20 Vision’ in the show, which opened with just the bass and my voice, and it was a revelation.  I realized that this sound, this concept could work, and I honestly wondered why I hadn’t had the courage to do it before.  So I started writing songs on the bass.  I tried to make the bass parts complete arrangements with harmony and rhythm, and weave my melodies between all that – the first song I wrote that way was “Fighting for the Wrong Side”.  And that’s when the music became unique.  Not for unique sake, but just because I was finally bringing all of my varied skills to the table and doing something that few others could, and it was where I felt I could give my best to the music.”

Himalayas is the culmination of that combination of musicality.  Scott’s songs have received honors or been featured in NPR’S Tiny Desk Contest, the International Songwriting Competition, John Lennon Songwriting Contest, and American Songwriter Magazine’s 30th Anniversary Contest, and he has had numerous cuts on other artists’ albums. Scott was a showcase performer at 2018 Americana Music Festival, and has been featured on Lightning 100 radio’s Nashville Sunday Night series. He is touring this fall as a featured artist on the Lauren Daigle “Look Up Child” tour, as well as the “Win/Win” tour with Matt Wertz and Jon McLaughlin.

He has shared the stage with some of the greatest artists of modern music, such as Alison Krauss, Barry Gibb of the BeeGees, Bruce Hornsby, Brad Paisley, Peter Frampton, Steven Curtis Chapman, Emmylou Harris, Dave Barnes, Ben Rector, and many more.  He’s currently touring in support of his September release, Himalayas, which was produced by himself, Charlie Peacock (The Civil Wars, The Lone Bellow) Gary Paczosa (Alison Krauss, Sarah Jarosz), and Shani Ghandi (Sarah Jarosz).