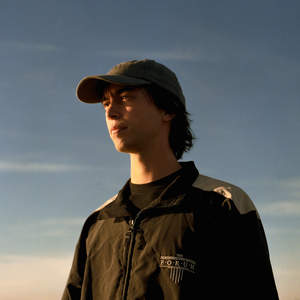 At the end of “Poison Root,” the opening track on Alex Giannascoli’s new album, Rocket, the 23-year-old artist repeats the phrase “Now, I know everything” again and again, his voice seething over a clatter of banjo, violin, and acoustic guitar sounds. It’s difficult to ascertain the exact tone: does he really think he knows everything? Or are these incantations a form of self-assurance, covering up insecurity? The tension between ambition and self-doubt in this closing refrain is typical of Rocket’s fourteen tracks. Over musical backdrops that effortlessly jump from sound collage to country pop to dreamy folk music, the cast of characters that Alex G inhabits have fun, fall in love, develop obsessions, get into trouble, and burn out. Rocket illustrates a cohesive vision of contemporary experience that’s dark and foreboding, perhaps especially because of how familiar, or to use Alex’s word, “unassuming,” the settings are.

With a goat-adorned cover painted by Alex’s sister, Rachel, Rocket is the Philadelphia-based artist’s eighth full-length release—an assured statement that follows a slate of humble masterpieces, many of them self-recorded and self-released, stretching from 2010’s RACE to his 2015 Domino debut, Beach Music. Rocket’s sessions began shortly after Beach Music’s ended, with Alex tracking songs at home, by himself and with friends, in the gaps between a hectic 2015 and 2016 touring schedule. Both albums were mixed by Jacob Portrait (Unknown Mortal Orchestra, Bass Drum of Death), who lent them a fine-tuning that retains the homespun personality of earlier efforts.

Amid the process, in the fall of 2016, Alex made headlines for reasons outside his own releases. He had caught the attention of Frank Ocean, who asked him to play guitar on his two 2016 albums, Endless and Blonde. More than any stylistic cues, what Alex took from the experience was a newfound confidence in collaboration. “I always have a hard time letting people play on my stuff,” he says, “but I saw how comfortable [Ocean] was using other people’s playing.” Alex’s previous albums are largely solo affairs, but Rocket wears this collaborative spirit proudly. Touring band members Samuel Acchione and John Heywood contribute guitar and bass, both soloing on “County”; Samuel’s brother Colin plays bass on two songs as well. Emily Yacina, a more frequent collaborator, sings on “Bobby” and “Alina,” and Molly Germer shows up throughout the album on violin and vocals. Germer’s violin was a game-changer, as the instrument “added a texture that I can’t get on my own,” Alex notes.

The looser, collaborative approach helped cultivate the variety of musical styles that Rocket presents. The dense, folky cluster of “Poison Root” leads to the bouncing country-rock of “Proud,” which is followed by the sophisticated harmonies of jazz-pop tune “County.” Later, the freaky, frantic “Witch” unsettles the album’s pop sensibility, while instrumentals “Horse” and “Rocket” set a more placid mood—that is, until the distorted, beat-driven “Brick” destroys any feelings of serenity exuded by the surrounding songs. Rocket ends with a rollicking free-for-all, “Guilty,” that in its numerous contributors and blaring saxophone synthesizes the album’s communal feel and restless sense of musical experimentation.

In addition to its fluid network of musical styles, Rocket showcases Alex’s ability to project the perspectives of several characters while maintaining a strong personal voice. Whereas Beach Music’s lyrics outlined vague situations, with Rocket Alex was “trying to create narratives that anybody could still inhabit,” he says, “but that had a more concrete quality.” He takes on the voice of memorable personalities such as what seems like an over-confident boy (“Powerful Man”), an alienated schoolgirl (“Alina”), and a couple with a creepily ambivalent relationship (“Bobby”). Their stories are at turns heartbreaking, puzzling, and hilarious; yet no matter the setting or the way he manipulates his voice, you always get an ineffable sense of “(Sandy) Alex G” as well as what he refers to as “an American perspective.”

“Proud,” the album’s longest (and perhaps catchiest) track, depicts a guarded, potentially disingenuous conversation. “I’m so proud of you,” the narrator says. But later, their sincerity falls away: “I wanna be a fake like you…,” they add. “I just wanna play the game.” The chorus strikes an earnest note—that the person singing works not to play “the game” but to provide for their “baby.” Yet Alex makes sure that it’s never perfectly clear who’s talking, or who believes what, casting doubt over an otherwise personable, inviting song. Track eight, “Sportstar,” traces another uncertain—though, in this case, one-sided—dialogue. Here, the narrator is an obsessive fan of the titular “sportstar” who, with pitched-up vocals and atop a melancholic piano lead, recites stalker-like requests that range from benign (“Let me tie your Nikes”) to violently sexual (“Could you hit me too hard”). That the “sportstar” remains anonymous speaks to Rocket’s open-endedness. Even if the stories are grounded in specific ideas and real experiences, Alex paints pictures that leave room for listeners to share in the events—to interpret them however they’d like, without regard for a “right” answer.

“I want [Rocket] to be completely unassuming,” Alex says. “I wanted it to be full of these characters that don’t know how crazy they are.” Rocket doesn’t have a pointed theme so much as these general feelings of unsteadiness and incomprehension—feelings we remember from growing up and that creep into the everyday life of adulthood as well. In some ways, the album’s title encapsulates this sense: “I like the word ‘rocket’ because it sounds immature, attention-seeking,” Alex explains. But while rockets certainly make a big impression, they also burn out. On Rocket, the myopic characters teeter between the initial explosion and the ultimate burning out. Alex himself, though, in a collection of songs that’s both his tightest and most adventurous, is poised only for the ascent.