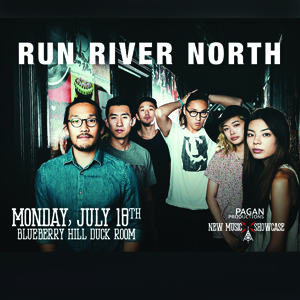 “During the writing of Drinking From A Salt Pond, the band admits to flaring tempers and tense operations as they worked to redefine their sound, goals, and relationships…”

Run River North will be the first to tell you: it has largely been an uphill climb for the indie rock sextet from Los Angeles, a hero’s journey full of odds-defying opportunities seized amidst rocky naysayers and the snagging brambles of band life. And now, with their second full-length album Drinking From A Salt Pond, Run River North are poised to push forward and create their own wake as a major voice in today’s music landscape.

Since the band’s beginnings just over four years ago, their rise has been steadily spectacular, marked by appearances on national television, sold-out shows at historic venues, tours with rock and roll royalty and heaps of praise from fans and critics alike. As they blossomed, they embraced their initially folk-driven sound, which found its harmonic home alongside rootsy, foot stomping, sing-along-leading peers like Mumford & Sons, The Head and the Heart, and Of Monsters and Men. Powered by the acoustic-guitar-and-vocals songwriting of frontman Alex Hwang, their 2014 self-titled debut record, produced by Phil Ek (Fleet Foxes, Modest Mouse, Band of Horses), was released with their lineup rounded out by the strings duo of Daniel Chae and Jennifer Rim, Joe Chun on bass, Sally Kang on keys, and John Chong on drums.