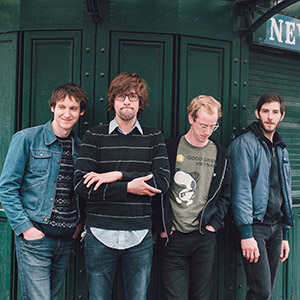 Fronted by the affable, spectacled Jordan Hudkins, Rozwell Kid write massive, gritty, excitable power-punk songs; they channel Blue Album guitar grandiosity and eternally-hummable melodies conveyed in ‘ooo”s, the likes of which would make Rivers Cuomo weak in his problematic knees. But when it came to writing Rozwell Kid’s new album, Precious Art, Jordan Hudkins found himself in the strange place of wondering who and what Rozwell Kid actually was. After more than two years on the road, the band – completed by guitarist Adam Meisterhans, bassist/vocalist Devin Donnelly and drummer Sean Hallock – hadn’t quite hit a dead end, but they needed to regroup, rethink and refind their identity.

All of those questions are thankfully answered by the twelve songs that make up Precious Art. It is a quintessential Rozwell Kid album and something entirely new at the same time. It’s teeming with understated nostalgia, but doesn’t get too lost in the past. Rather, it recalibrates the past, revisiting it with the added wisdom that comes with age. It’s quirky in the way that Rozwell Kid songs have always been quirky, but more than any other record the band has made, it sees Hudkins diving deep into the heart of human existence, telling universal truths based on his own personal memories and unexamined experiences.

“Nostalgia has always been part of my inspiration for songwriting,” admits Hudkins. “I’ve always seemed to pull from childhood memories and recontextualized them, where I kind of imagine it as a big 30 year-old kid wearing OshKosh B’Gosh overalls singing about these things they experienced or thought about as a kid.”

The result is an album that expands the strain of weird whimsy that’s always run through the band’s songs, but on which it’s increasingly difficult to ignore the more serious side of things. Nothing illustrates that more than the song “Booger.” Yes, it’s an amusing tale that revolves around the green stuff that comes out of your nose being smeared across the screen of your smartphone, but it’s also so much more than that – it’s a tender, touching and even tragic ode to lost love, that is filled with an audibly sad beauty.