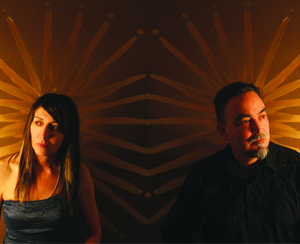 30 years on, upwards of 15 band members deep & an Ocean in-between; Poi Dog Pondering continue to thrive & evolve on their 8th full length album entitled “Everybody’s Got A Star”. Their unique signature ‘Acous-tronic’ blend of orchestral, rock and dance music influences, shine through with PDP’s ever present irreverence to stylistic conformity.

“Everybody’s Got A Star” is an unapologetic off-road venture, a Joy Ride recalling the vibe of 80’s/90’s Night Club DJs, adventurous enough to careen from one genre to the next, with a slight membrane of madness to the method.

“Growing up in Honolulu, we really only had one good Live Music/Disco/ Club; The Wave. It was Punk Rock/New Wave kids from 9 to 2am, then a Gay Disco from 2am to 4am. Everybody mixing it up & having fun. You could hear everything from Iggy Pop’s “Lust for life”, to Loose Joints “Is it all over my face”. I’m super thankful for that eclecticism. Music for dancing is like an elliptical orbit, it’s always been around me, sometimes it swings in real close and sweeps me along full force for a while.
For me… this record is about; trusting & following the spark of an idea. The thought that kept running through my head while working on this album, was… “”if it excites you, follow it / Let the song be what ever it wants be / let the album be what ever it want’s to be. Realize each idea, & keep moving“. – Frank Orrall

Poi Dog Pondering keeps thriving because their ethic has always been about following their musical heart. Their steadfast independence has allowed them to perennially bloom. From bohemian street buskers to impossible to market major label sacrificial lambs, to hard won autonomy with their own record label; Poi dog pondering have ripened into staunchly independent musical voyagers. They have let every sound that excited them flow through their music and flood it with ever changing colors: Orchestral, Acoustic and Electronic textures. Rock Band Disco, Chicago Stepper Soul & their unique ‘Soul Sonic Orchestra’ Sound. (Threaded all along the way with ‘heart on the sleeve’ lyrics that embrace the beauty and pain of everyday life).

30 years down the line there is a bolstered sense of history within the band now. A swagger that comes from having steadfastly carved their own path. It is quite apparent that PDP has always been, and ever will be, in-it-for-the-love-of-it; creating and performing. Line up changes are par for the course. PDP is an organic entity, it changes like life does. But there is a core with strong roots & deep personal history, open to new ears and ready to experiment. That’s what keeps it vibrant.