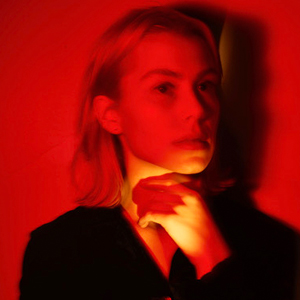 *THIS SHOW IS SOLD OUT*

Don’t let the somber tone of her music fool you: the Los Angeles-based singer-songwriter Phoebe Bridgers has a sunny disposition.

“I’d hate for someone to think I’m sipping an espresso somewhere judging people or feeling sorry for myself. OK, I definitely do that once in a while, but I don’t consider myself an intense person.”

Bridgers grew up in the rose-colored city of Pasadena, attending the prestigious Los Angeles County High School for the Arts to study music. From an early age, she found encouragement from a close-knit artistic community of friends and family to follow her dreams, and at school she forged relationships that would teach her as much about her craft as her classes.

“I think most of my musical education had to do with being around a ton of teenagers who listened to music all the time,” she says. “At school I had classical training for my voice, but I think being surrounded by people who were really enthusiastic about art and going to concerts all the time was the real education.”

“I met Carla Azar of Autolux – and she showed me Elliott Smith for the first time, which was my first personal connection to music that one of my parents hadn’t showed me,” she says. “It seemed so different from anything I’d listened to before. It is so personal, so intense.” Bridgers’ work would be heavily influenced by Smith’s sparse lyrics and subdued emotional style, in addition to that of her other favored singer-songwriters like Joni Mitchell, Tom Waits, and Leonard Cohen.

“Los Angeles is interwoven into my music inherently,” she says. “I don’t necessarily try to reference it, but because I’m pulling from experience it just appears. A lot of shit goes down wherever you may grow up.” After graduating from high school, Bridgers spent a year gigging around the city, playing as often as she could, making mistakes and learning while on her feet. “I’ve always been very appreciative of the LA thing,” she says.

But of course the truth is that the unique ingredient at play, the calling card that has drawn all this interest and intrigue, is simply Bridgers’ music itself. Her powerful, lilting voice and her haunting, introspective songs light the torch that shows the way, and are what have inspired artists like Ryan Adams to produce her 2015 single, or Julien Baker to bring her on tour in 2016, as well as John Doe and Conor Oberst to sing with her on her debut album. There is a delicate balance to her work, a dance between veiled narratives and earnest emotions, between whispers and shouts. And according to Bridgers, everything you hear has arrived by feeling; her music is what comes when she is at her most honest, without specific intention, and she aims to be in her songs the person she is in the world.

Stranger in the Alps opens with the one-two punch of “Smoke Signals” and “Motion Sickness,” a pair of songs that highlight Bridgers’ abilities. The former, a gorgeous, ethereal tune guided by sparse electric guitar and sweeping strings, toes the line between weary and wistful, using specific anecdotes from its singer to tell its tale. The style highlights the strengths of Bridgers’ unique lyric writing perspective: there are overt references to lost idols, canonical pop songs and actual incidents, but her stories unfold through precise, evocative imagery sung in her subtle, confessional style. The latter is perhaps the most upbeat moment on the album and was written on her baritone guitar and discusses a problematic relationship from her past. “I feel like I’m getting more focused when I write,” she says. “My songs are super personal.”

“Scott Street” is a song about inserting distance between intense personal relationships via new friendships and was inspired by East Los Angeles where Bridgers now lives. “Killer” is a song originally appearing on her Adams-produced single but is re-recorded here by the album’s producer, Tony Berg (Andrew Bird, Aimee Mann, Blake Mills), with John Doe singing alongside Bridgers. That song in particular inspired her to be more honest in her approach. “I wanted to be more genuine with my lyrics, and to me that meant being self-deprecating or a little more self-aware, and not using words that just sounded pretty,” she says. “I had an epiphany that I can be honest with myself and with other people when I’m writing.

Elsewhere, Conor Oberst joins her for the duet “Would You Rather,” a singer chosen for his unmistakable voice, and the Mark Kozelek cover “You Missed My Heart,” which ends the album. As with any singer’s debut, the songs here comprise a wide swath of Bridgers’ life, dating from the oldest, “Georgia,” which she calls the most different-sounding on the LP, to the opening pair, which were written after the recording process had already begun. Berg and co-producer Ethan Gruska worked with Bridgers to record in on-and-off stretches in between tours over 2016 at Berg’s studio in Brentwood.  Phoebe went into the studio with the majority of the material written, however “Smoke Signals” and “Motion Sickness” were written in a cabin in Idaho, while Bridgers was waiting for a tour to begin.  The pair were the last songs written for the LP.

“I’ve gotten a lot happier since making my album and have a strong sense of purpose,” she says. “I wasn’t trying to be too lo-fi, too hi-fi, too self-serious, too disingenuous…I feel pretty confident that I’m finding my voice. I wanted the album to completely represent who I am and these songs are representative of what I set out to do.”