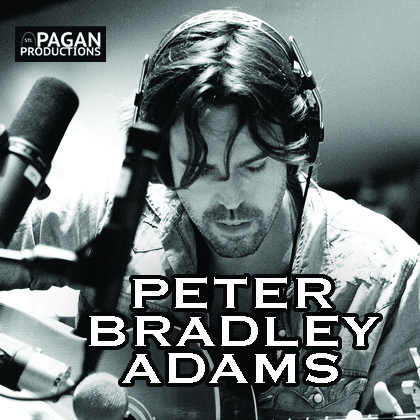 A singer and songwriter whose work is musically subtle but emotionally forceful, Peter Bradley Adams was born in Birmingham, Alabama and grew up in a musical family, taking inspiration from his grandfather, a jazz musician proficient in the piano and clarinet. Adams began learning the piano when he was six years old, and went on to study music at the University of the South in Sewanee, Tennessee, the University of Alabama in Tuscaloosa, and the Thornton School of Music at the University of Southern California. Adams worked in film scoring for a while, but in 1999 he teamed up with singer and songwriter Kat Maslich-Bode to form the group Eastmountainsouth. In 2003, after the duo was discovered by Robbie Robertson of The Band, Eastmountainsouth released their first album through Dreamworks SKG Records. While the album received positive reviews and tracks appeared in the movies Elizabethtown and Lucky Seven and on the TV shows One Tree Hill and Dawson’s Creek, Dreamworks’ record division was dissolved later the same year, and Eastmountainsouth broke up in 2004. In 2005, Adams launched his solo career with a self-titled EP, and also began a sideline as a session musician, playing on albums by Michael Penn, Juliana Hatfield, and Josh Groban, among others.

In 2006, Adams released his first full-length solo effort,Gather Up, on the independent High Wire Music label, and partnered with the Seattle-based indie label Sarathan Records for his second album, 2008’s Leavetaking. Adams’ third album, Traces, appeared in 2009, and Between Us was issued in 2010. In 2011, Adams and fellow songwriter Caitlin Canty collaborated on a side project, Down Like Silver, who released a six-song EP of songs they wrote together. Adams launched his own record label, I Me Mine Records, in 2014 with his fifth solo album, The Mighty Storm, which was recorded in Nashville at the legendary RCA Studio A.