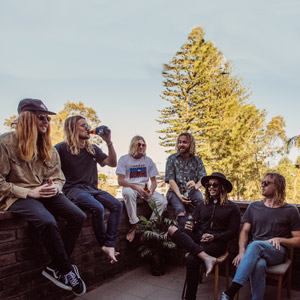 On the back of releasing their 2nd Album ‘Chiaroscuro’ on March 9 2018, Ocean Alley will tour North America for the first time ever in May & June.

Oozing with cool and a pulsating bass line, their latest single ‘Confidence’ is the third single from their new album ‘Chiaroscuro’. The title, traditionally related to the artistic contrast of light and dark tones, captures the underlying theme heard across the 12 album tracks – in both subject and sound they explore the power of duality, taking on alternate interpretations including right and wrong, control and surrender. From the hazy, hopeful tones on the paradoxical ‘Happy Sad’, to the wistful yet commanding howls on ‘Knees’, and warm, rich rolling guitars on lead single ‘The Comedown’ which was voted at #48 in triple j’s Hottest 100 of 2017, each song is drenched in equal parts distortion and dreaminess, pairing blissfully scuzzy riffs with intoxicating echoing vocals, to create the ultimate fusion of psychedelic reggae and laid-back surf rock.

It’s been a long time coming, but the band will finally hit the road across North America, taking in dates from Los Angeles to New York, as well as throughout Canada.

Small Cameras (NO detachable lens, OK). NO Audio. NO Video.