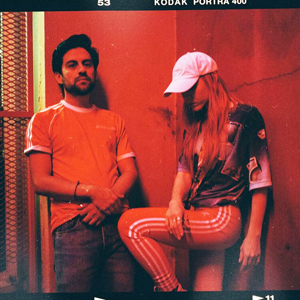 With the release of “SGL”, Now, Now emerge from transformative and transitional few years since their last shows played in support of Threads. Much has changed, with the mutual and amicable departure of guitarist Jess Abbott to pursue a different creative direction through her work as Tancred being the most visibly apparent difference. However, that parting of ways is only a fraction of the story. Below the surface lay challenges, struggle, and a lot of growth for KC Dalager and Brad Hale as people, musicians, and songwriters. And while as a duo they find themselves back to the same binary dynamic they started with over a decade ago, they couldn’t be further from who they were when two friends who met at marching band practice and started making music together in a basement.

As they wrapped up nearly three years of writing, recording, and then touring in support of Threads, KC and Brad were mentally and emotionally worn out. “We couldn’t find a way to recharge ourselves creatively,” recalls KC, and that lead to a feedback loop of writer’s block and self-doubt. And so they took a step back, focusing their energy on songwriting and producing outside of Now, Now, or with different artistic mediums like Brad’s work in visual art for bands including Sylvan Esso, The National, Minus the Bear and War On Drugs. The break allowed them space to work on figuring out the bigger picture of who they were as artists and musicians, rather than staying trapped in tunnel vision, focused on a next album. “I worked a lot on my craft as a writer,” explains KC, “on learning who I am and what my strengths and weaknesses are in that sense.” She also started tackling longstanding insecurities she’d been battling all her life, clearing barriers to creativity at their root.