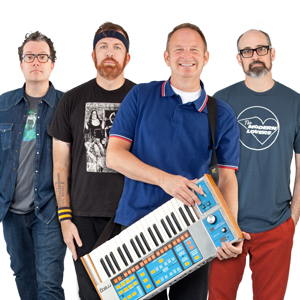 W/ THE COPYRIGHTS, THE HADDONFIELDS
Friday, December 6, 2019
Duck Room
Doors open at 7 pm
Show starts at 8 pm
$18 in Advance/
$18 DOS
All Ages / $2 minor surcharge
Get Tickets RSVP on Facebook http://nerfherder.com/
Set times:
Nerf Herder – 9:45PM
The Copyrights – 8:45PM
The Haddonfields – 8PM
Doors – 7PM
*Set times are approximate and subject to change without notice.
Small Cameras (smaller than 5″, point and shoot cameras without a detachable lens or a telescoping lens longer than 5”), OK. NO Audio. NO Video.

The current band features founding members Parry Gripp and Steve Sherlock, with newer members Linus Dotson and Ben Pringle. Nerf Herder’s 5th album Rockingham is an explosion of geekiness with songs like “At The Con,” a song written after a performance at Atlanta’s DragonCon, “Ghostbusters III,” a lamenting tune about how the sequel will never be released, and “I’m The Droid (You’re Looking For),” which is made entirely of lines from Star Wars and was recorded at Skywalker Ranch. Other standout tracks include “We Opened for Weezer”, a song reminiscing Nerf Herder’s ’97 tour with Weezer, and “The Girl Who Listened to Rush”.