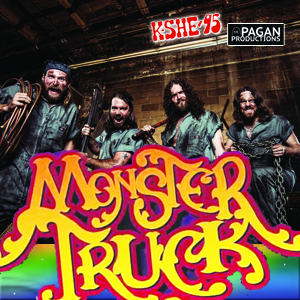 The term Rock n’ Roll gets thrown around pretty haphazardly. One can go as far as stating it’s been bastardized to the point of being unrecognizable, ironically shouted on stages worldwide, and classified dead or MIA by the very musicians that once upheld its standard.

Enter Monster Truck. There’s something comforting about a band name that delivers exactly what you expect to hear. Born in 2009 from the ashes of various Canadian Indie bands, Monster Truck began as a sonic affront to the very industry its members were bred from. After feeling more like cogs in the music industry machine, Jon Harvey (bass & lead vocals), Jeremy Widerman (guitar & vocals), Brandon Bliss (organ & vocals) and Steve Kiely (drums & vocals) broke free to forge their own path, answering only to themselves. “It was admittedly a bit selfish from the get-go as we only were looking to please ourselves,” laughs Widerman. Their unabashed approach to making and performing music became infectious. “We just wanted to mix all of our favorite hard rock, punk and classic rock favourites into something raw and basic,” states Widerman, almost as if to suggest that no one had done it to his liking yet. The band was doing something right.

A ground swell of regional fans quickly began rushing to any local venue to see the band perform live. Rock n’ Roll is clearly not dead.Offers began to pile up for Hamilton, Ontario’s prodigious sons, and the band soon realized they had to make a decision to jump in hip deep and take the record label and tour offers more seriously. “The decision was probably easier than I’d like to admit,” adds Widerman, suggesting they were probably all kidding themselves thinking they weren’t willing to make sacrifices once again in an attempt to make music for a living. What started as a fun and albeit ‘selfish’ musical side-project, quickly gained momentum and took on a life of its own.