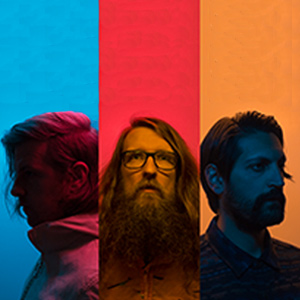 Dave Davison’s voice – a seasoned croon continually abandoned for a controlled yet penetrating howl – betrays the range of emotions he has faced in the six years since the band’s last release. In 2012, just before the launch of the acclaimed Beware and Be Grateful, Davison (guitar, vocals) unexpectedly lost his father, his best friend. Grief took the form of inquiry: How can you reckon with the sudden death of someone whom, your entire life, was right beside you? How can you go on living in the unbridgeable gulf between the light and the dark, between the dark and the light?

The title of Maps and Atlases’ new album, Lightlessness Is Nothing New, serves to foreshadow an emotionally and musically dynamic collection of songs that contemplates the jolt of loss and the strain of longing to music that, against our better judgment, makes us want to dance. “The story of this album is much more interesting than any other album we’ve made before,” Davison says, leaning over a weathered dining table in his apartment on Chicago’s North Side. Lightlessness began as a solo album, unfolding over a six-year period during which time Davison was struggling with anxiety. Writing music became therapeutic, allowing Davison to identify and contemplate his obsessive tendencies while tracking a growing awareness of himself as a musician, a partner, a friend, a person. Working initially with producer Jason Cupp (American Football, Good Old War), the album took on a meaningful yet indefinite form, spinning for months and then years in a seemingly endless quest into undiscoverable realms.

It wasn’t until Davison enlisted the help of longtime friend and drummer Chris Hainey that the album’s motivations and desires began to reveal themselves. Hainey’s empathetic, responsive drumming fed off of Davison’s percussive and emotionally evocative lyrics, rumbling to the forefront the album’s drive to reconcile the most impossible of divides (between hope and disquietude, the seen and the unseen, madness and mindfulness, between you and me). Finally, bassist Shiraz Dada untethered this dialogue, inserting an upbeat, pop sensibility that serves as a relentless reminder of the contradictions that sustain us. Maps’ spontaneous approach to collaboration (an approach they’ve embraced since 2010’s Perch Patchwork, says Dada) lends itself to the band’s increasingly looser, more intuitive sound that has helped them to transcend their musical influences (Talk Talk, Peter Gabriel, the Talking Heads) and regional affinities (Chicago, Los Angeles).

Over their fifteen years together, Dada reflects, the band members have grown individually and collectively “congruously in taste.” “It didn’t happen overnight,” he assures, “but in hindsight it feels like it did.” After cementing the structure of Lightlessness with longtime producer Jason Cupp, Maps joined up with Scott Solter. The veteran producer of acts such as Okkervil River and The Mountain Goats, Solter has a reputation for pushing artists out of their musical comfort zones. “The Record is what it is because Jason and Scott both had a hand in it,” explains Hainey. “Jason is very structured,” Davison adds. “Scott’s seemingly chaotic sense of sonic space, on the other hand, brought the songs to life.” Lightlessness ushers forth with a fullness that belies its name. It is lush and bright, painstakingly yet breathlessly assembled in a way that asks for but resists easy detection of instrumentation. “We’ve always been interested in percussion,” notes Davison, reminiscing about the band’s early embrace of the guitar tapping style that garnered them the reputation of a “math rock” band after the release of Tree, Swallows, Houses in 2007. On Lightlessness, Solter helped the band expand, refine, and experiment with new methods of percussion. For example, when we think we hear synthesizer, what we’re really hearing are steel drums. “Two really brilliant producers imparted their own methods and sounds at different stages in the process,” explains Dada. “It made for a unique finished product.”

The album’s sonic illusions serve as parallels to the album’s interest in the ineffable. In “Ringing Bell,” an elegy for Davison’s father, Davison wonders about the afterlife “while here the music just keeps playing on.” And in a literal sense, it does, with Dada and Hainey thundering forth resonant bass and drums to serve as sure footing for a song that wrestles with the unknown aspects of life and death. “It’s hard to say, it’s hard to tell,” Davison sings in the song’s chorus, “but I still feel you around me like the remnants of a ringing bell.” These existential inquiries carry over into “Fall Apart,” a song so infectious it moves us to dance as we consider the impermanence of everything. “Should I tell ‘em that the world might fall apart” questions Davison, a sense of panic rising in his voice, “or should I lie and say the good things that you know won’t change? They might stay the same forever.” A series of pop-soaked “do-do do-do’s” follows that carries a renewed sincerity in juxtaposition to the song’s themes of emotional flux and the innate precariousness of life. Hope prevails, albeit somewhat ironically, in Davison’s interest in superstition and the occult – radical forms of faith that promise light, luck, and happiness while, at the same time, slicken our grasp on reality. “Fog and the Fall,” whose manic tempo (“a tricky one to nail,” says Dada) reminds us of the band’s affinity for restless time signatures and energetic soundscapes, has listeners sifting through tea leaves as the song’s refrain “I can’t think straight” morphs from a distressed cry into a meditative chant. In the album’s closing track, “Wrong Kind of Magic,” Davison reflects – to climbing guitars that spiral swiftly back down to Earth again – on the false sense of control that superstitious beliefs can provide, brooding, “I lost it then I found then I lost it again. Couldn’t hold it long enough to grasp it.”

Maps and Atlases’ new album Lightlessness Is Nothing New is ultimately a celebration of our magnificent, foolhardy pursuits to find love, happiness, and control in a world defined by mystery, hardship, and, worst of all, brevity. In the brooding yet playful vein of the Talking Heads and Peter Gabriel, Maps embraces the paradox of what it is to be human – constantly searching and, forever unsatiated, returning again and again, with everlasting hope, to the everdarkening fray.