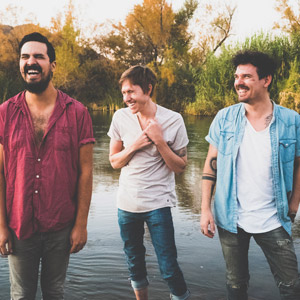 Formed in 2003 by frontman/guitarist Leighton Antelman in the Phoenix suburb of Gilbert, Arizona, the indie rock band known as Lydia has spent the last decade-plus recording, touring and taking its music well beyond the American Southwest.

With its most recent offering, Run Wild, Antelman, Matt Keller and Justin Camacho took a very organic approach to writing – one in which the music just sort of came together on its own. “We all pretty much have our own mini studios in our separate houses,” Antelman explains. “So we tend to write songs on our own. For whatever reason, we’ve never really been a band that gets into a room and jam it out. I usually get as many ideas as I can together and then I throw them at the team and see what sticks. I still genuinely don’t really know why certain songs stick and others don’t, but I go for a quantity of ideas and let the pieces fall as they may. The songs seem to come out as they please.”

Run Wild was produced by Aaron Marsh (of Copeland) and Colby Wedgeworth, both of whom Lydia has previously worked with. “The thing we had never done was use two producers for one record,” says Antelman. “I always think you should be experimenting with everything in your life. Who knows, we might use four on the next record or we might use none. I genuinely don’t have anything that’s a ‘deal breaker’ when creating in the studio.” Lydia’s main goal is to evoke emotion – no matter what emotion it is. “I don’t care what specific feeling that is…it just has to pull on some things inside you, change your DNA around for a bit,” he adds. “That’s how a song makes the cut or gets thrown to the curb these days. If what you do can make the audience feel genuine emotions, I think you’ve done your job.”

Since the release of Run Wild, Lydia has received coverage from some of the top publications and had the video for the track “When It Gets Dark Out” picked up by major media outlets such as MTV, AXS TV and Yahoo Music. They added another headline tour to their resume, adding to a list that already included extensive headline and support tours across the US, Canada and UK, as well as the Zumiez Couch Tour, Vans Warped Tour, and the Bamboozle Festival.

Lydia will head out again this fall on a headline tour that will see the group adding special elements to their usual performance. “We’ve had the idea of doing this with some extra players and live strings on stage for a little while now,” enthuses Antelman. “We’ll be playing music from all of our releases over the years. We’re all really excited to see what makes it onto the stage and into the show. That’s a really fun part about putting together a new tour.”