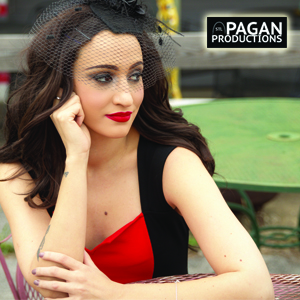 Emily Wallace
Monday, November 9, 2015
Duck Room
Doors open at 7 pm
Show starts at 8 pm
$12.50 ADV / $15.00 DOS
21+ • A PAGAN PRODUCTIONS EVENT.
Get Tickets RSVP on Facebook
There’s a sign on the outskirts of town.A buzzard sits atop it. The grass brown and parched below. It’s dusty, faded, chipped at the edges, graffiti filling the empty white spaces, a bullet hole or two visible in the large, black letters that read:Welcome to Faded Gloryville. Leave your dreams behind.In the eyes and imagination of acclaimed Canadian singer-songwriter Lindi Ortega it’s a place we’ve all been, we’re all familiar with or will one day know all to well.Some visit. Some stay. Some escape. Some leave only to return again.
And for Lindi, it was also the source of inspiration — in title and in spirit — for her stunning new collection of country-kissed songs that make up her fourth full-length release set to come out on new Last Gang Record imprint, The Grand Tour.It is an album that is filled with the sights and sounds and souls of those who’ve found themselves in Faded Gloryville, brought to its saloons, flophouses and cheap motels by drink, by debt, by vanity, heartbreak, failure, fear or misfortune.Her first glimpse of the place, oddly enough, was in another artistic vision, that of the Jeff Bridges film Crazy Heart, which depicts a fellow musician exiled in a similar metaphorical town, down-and-out, drunk and debasing himself and his talents for those who could care less.“I had a moment where I thought, ‘Could this be me? Could I wind up like this?’ ” says Lindi. “That was a very honest question to myself.”
That fact, the idea that she would question that shouldn’t come as much of a surprise to those familiar with the subject matter of her past work, specifically 2013’s Juno Award-nominated Tin Star, considering much of it was powered by Lindi’s experiences as a young, struggling artist in the equally as fabled and dream- dashing place of Nashville, where she now makes her home.