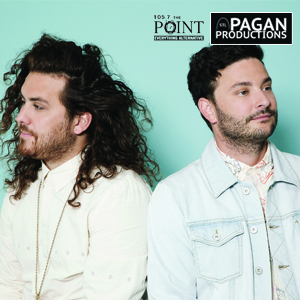 You could certainly call it a “Turning point” or a “New chapter,” but Detroit’s JR JR have been working towards this moment since first forming in 2009. Their self-titled third full-length album, JR JR [Warner Bros. Records], represents a complete realization of the creative union between members Daniel Zott and Joshua Epstein.

“To me, this album is like the third part in a series,” explains Epstein. “When we first started the band, we were trying to make pop music in the way we remembered and learned it. You can feel that on our first album, It’s A Corporate World. The second, The Speed of Things, took everything a step further, but it was a little more polished and professional-sounding. JR JR has a little bit of both worlds. We’ve gotten better at recording, and we’ve grown together—and separately. It’s the culmination of the series so far.”

Zott puts it succinctly, “It feels like we found our voice.”

Under their original moniker Dale Earnhardt Jr. Jr., the group built a rather rich history, eventually setting the stage for JR JR. From famously getting signed by a Warner Bros. A&R exec who jumped on stage at CMJ, at which point Zott remembers asking, “Who is this asshole?” to snagging their own Ice Cream flavor back in Michigan, JR JR Mint, and even being invited to practice by the Milwaukee Bucks, their indefinable and inimitable charm continually proves magnetic. Along the way, they’ve sold out countless shows, given TV performances on the likes of Conan, and cultivated a rabid fan base. 2014 saw them step outside the box, creating music for the hip-hop mixtape, Produce, which featured the likes of Murs, Asher Roth, Chuck Inglish, and more. It creatively galvanized them and sparked the process behind their third offering.

“Produce gave us the chance to step back and look at production in a different way,” says Zott. “We realized we were adding too many things and layering too much. We became more straightforward and minimal, as a result. It taught us a lesson, and we started to embrace that process when we make our music. We find what the songs need, do that, and don’t keep piling on bells and whistles.”