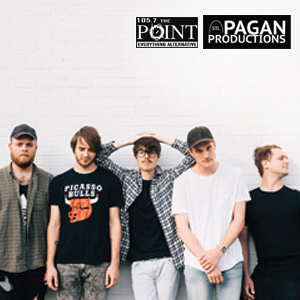 Hailing from Rochester, NY, Joywave make conceptual, self-aware indie pop that’s both meta and personal, retro and cutting edge, all-ages and sophisticated. To step inside a Joywave song is to lose yourself in a thoughtfully-curated, tech-savvy synthesis of emotions, genres and random noise, blended into an eminently danceable DIY sound smoothie. Add to that an energetic and seamless live performance (as Rolling Stone said of their 2014 Lollapalooza show, “Joywave brought the disco to the forest”) not to mention lead singer Daniel Armbruster’s unforgettable mustache, and the result is a buzz that won’t stop growing.

2015 has been a whirlwind of activity for the quintet — they released their debut full-length release ‘How Do You Feel Now?,’ played Summerstage in Central Park, watched as their songs “Somebody New” and “Now” rose up the alternative radio charts and most recently launched their first, and predominately sold-out, U.S. headline tour. The band also made their mark outside the U.S. touring with Brandon Flowers this past spring and giving buzzworthy performances at this year’s Reading and Leeds Festivals and played to their biggest audience yet at Lollapalooza Berlin.

But things haven’t always been this up — Joywave’s is a post-recession survival story of creativity fueled by hopelessness. The five band members — vocalist Daniel Armbruster, guitarist Joseph Morinelli, bassist Sean Donnelly, keyboardist Benjamin Bailey, and drummer Paul Brenner — met at school in the economically-depressed blue collar town of Rochester, in western New York state. Daniel and Sean initially teamed up because “Sean had some software I wanted,” says Daniel, and the band went through various incarnations, including a joke band whose songs satirized contemporary pop hits. “Within a couple months of starting this fake band we did a showcase for a major label,” says Daniel. “We were like ‘guys, this is a joke, thank you for the pizza.'” The next endeavor was more traditional guitar rock. “We learned opposite things from those two bands,” says Sean. “Basically that the whole music industry is a giant shit storm, so we should do whatever makes us happy. That is what led to the genre-hopping and experimentation of our current sound.”

Joywave as we now know it officially formed in January 2010, and they released their first mixtape in March 2011, ‘77777,’ which Daniel describes as “a space odyssey constructed around one cohesive fictional story.” It was followed by the ‘88888’ mixtape, and their EP, ‘Koda Vista.’ Joywave’s early releases enabled the band to explore which viewpoints and genres best suited Daniel’s voice, until they were finally ready to record their debut album, ‘How Do You Feel Now?’ It’s a record that’s deeply personal to Armbruster, who never imagined that as an adult he’d still be living at his parents’ house and making music in the basement with the same friends he’d had since high school. “I still sleep in the same bed that I did when I was in seventh grade,” he says. “In seventh grade you think you know where life’s going to go and then you’re like ‘wow, I didn’t do anything yet,’ which is super disappointing and super eye opening too. So this album has been completely inspired by the idea of wasting away at home and watching your life fly by.”

Signing with Hollywood Records in 2013 enabled them to get out of Daniel’s basement and rent their own studio, a free standing cottage in Rochester that resembles a “weird Soviet dentist’s office” whose plumbing stopped working during recording, and whose ceiling caved in. “When the plumbing went down for a couple weeks, part of the consequence of that was that we felt compelled to record ourselves peeing into milk cartons,” says Armbruster. The “whoosh of the pee stream” made it onto the beginning of one of the tracks. In fact, the entire album is a tapestry of field recordings and app-mutated sounds: noises from a JetBlue flight, hallelujahs of a choir in Brooklyn, and samples from “Fantasia,” “Peter Pan,” and “Bambi” (Joywave is the first band Disney has allowed to sample its classic cartoons).

“Somebody New,” the first single off ‘How Do You Feel Now?,’ is a “lazy love song” that was born after Armbruster had a dream in which Skrillex was DJ’ing “this hilarious song, with this ‘woop woop’ dubstep riff. When I woke up I thought it would be funny to build a song around that.” The “Somebody New” video was directed by Keith Schofield (Duck Sauce, Beck).

The infectious “Tongues” is a reaction to Armbruster’s experience as a DJ, seeing the same fun-time people week after week, and having them describe in detail all the things they wanted to do with their lives, but never did. The buzz-inducing video for “Tongues” (directed by the DANIELS) features an almost entirely naked cast shot on 16mm, Joywave’s attempt to take the trend of putting naked girls in music videos and poke fun at it in their typically atypical style.

Obsessed with the processes and concepts behind music making, they cite pop’s great explorers — Damon Albarn and Kanye West, for example — as inspirations. Not that they sound like them, necessarily — for Joywave, what’s inspiring, more so than a specific song or artist, is a dedication to reinvention. “We tip our hat to people who do want they want to do and constantly reinvent themselves,” says Daniel. “People who say ‘I am going to do exactly what I want to do right now, and not worry about what I did before or what the last track sounded like.’ That level of reckless creativity is what we continually aspire to.”