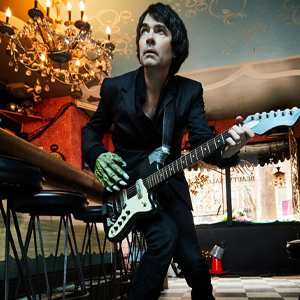 Jon Spencer is back, and he is ON FIRE!

Get ready for Jon Spencer & the HITmakers to BURN your playhouse down with their new long-player, SPENCER GETS IT LIT!

The incredible, indelible Jon Spencer (Blues Explosion, Boss Hog, Pussy Galore, Heavy Trash, etc) is back with the incendiary HITmakers  - and with his HOTTEST record yet!

Spencer Gets It Lit is classic Jon Spencer taken to the extremis – electro-boogie, constructivist art pop, a psychedelic swamp of industrial sleaze and futurist elegance. It is an epic master work of freak beat from the world’s weirdest garage. Across brain-boggling layers of fury, fuzz guitar, and a crash-bang battery of phaser blasts, photon torpedoes, and otherworldly zounds, he frantically spits, croons, rhapsodizes, and seduces. Spencer Gets It Lit is his most complex and groovy record in years, a dark, danceable odyssey – both a studied take-down of the early 21st century, and a celebration of the place were electricity meets the mind.

Thirteen wicked hot songs of love, loss, lust, life — from the Farfisa-fueled,warped psycho -punk  rave-up of “Junk Man,” to the intimate lover’s plea of “My Hit Parade,” to the outer-space end-of-days country funk of “Worm Town,” Spencer Gets It Lit delivers all of the friction, excitement, and post-modern depravity one could ever ask for!

Says Spencer, “Send out the Hit Signal! This is the most uncompromising album I’ve ever made!”

And the HITs just keep on coming!

THIS JUST IN! Taking over drum duties for the HITmakers on their upcoming spring tour will be superstar of skins Janet Weiss of Sleater Kinney, Quasi, Wild Flag, The Jicks, Slang, etc. etc!!!

Every show will be opened by a full set from Janet and HITmaker Sam Coomes championship tag-team, Quasi!

Guaranteed to be a tour for the ages!!!

True heroes of the underground!

Freak forces combined and multiplied in this indie-rock dream bill!