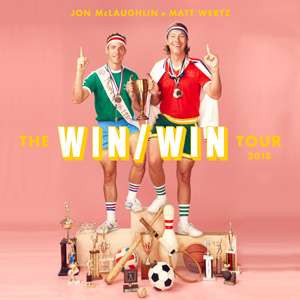 Don’t miss out on the VIP upgrade experience with Jon & Matt!

VIP is an upgrade purchased in conjunction with a ticket.

Get your VIP upgrade here!

Everything in Jon McLaughlin’s life makes its way into his music, whether he’s conscious of it or not. The artist, raised in Indiana and based in Nashville, brings all of his experiences and beliefs into each song he creates, something that is especially true now that he’s the father of two young girls.

Jon released his debut album, Indiana, in 2007 on Island Def Jam, attracting fans with his heartfelt, hook-laden songwriting and impassioned delivery. He’s released four full-lengths in the ten years since and revealed a true evolution in both his piano playing and singing. He’s played shows with Billy Joel, Kelly Clarkson and Adele, collaborated with longtime friend Sara Bareilles, co-written with Demi Lovato and even performed at the Academy Awards in 2008.

Jon’s album, Like Us, dropped in October of 2015 via Razor & Tie, and he spent the past few years touring extensively before heading back into his Nashville studio to work on new music.

The musician’s latest project is his Dueling Pianos video series. Every episode features a new guest artist and they perform mashups of never been heard arrangements

A self-made singer/songwriter, Matt Wertz spent years creating soulful, feel-good pop music on his own terms. Nashville — a city that doubled as his muse and adopted hometown — always played a big role in that creation process. It was the place where Wertz wrote his songs, the place he recorded his albums, the place he’d return after touring the country with songwriters like Jason Mraz, Maroon 5, Parachute and Gavin DeGraw.

Something changed after 2014’s Heatwave, a record that shone a neon light on Wertz’s appreciation for ’80s pop music. Wertz realized he’d grown perhaps a bit too comfortable in Nashville, where he’d been making music for more than a decade. Looking to write an album that tackled contemporary pop music from a different angle — literally — he headed to Los Angeles, where he spent several months writing songs for his ninth album, Gun Shy. Fueled by infectious, 90’s-inspired beats, lush textures, and soaring air-tight pop melodies, Gun Shy fires twin barrels of modern pop and synthesized R&B, finding new life in old-school influences.

“I realized I’d been making records in a similar way in the same geographic area,” Wertz admits, “and I wanted to get away from that comfort zone. I personally was needing a fresh approach  — to pull the clip on the grenade and blow things up and start over. I’m a fan of current pop music, and L.A. is very much about what’s happening now. I wanted to see how my music fit into that space.”

Filled with left-field love songs about guarding yourself, opening your heart to new possibilities, and wrestling with the sacrifice and vulnerability that love requires of everyone, Gun Shy finds Wertz urging his listeners — and, perhaps, himself — to continue taking leaps. It’s an album about stepping into unfamiliar situations, armed with the courage to fail and the drive to succeed. On “Committed,” the album’s kickoff track, Wertz rededicates himself to the artistic struggle, and with “Slow Motion,” he focuses his attention on a loved one by clearing away the clutter and distractions of everyday life. Later, during “Hold On To Me,” he channels his inner Michael Jackson on a song that poses some of the biggest questions of his career: why we’re here, who put us there, and what it all means. A longtime member of Nashville’s songwriting community, Wertz teams up with some of L.A.’s A-list pop writers for Gun Shy, including Ian Keaggy (Hot Chelle Rae, Cody Simpson), Ben Romans (The Click Five, Carly Rae Jepsen), and Seth Jones (Greg Holden, Tyler Bryant).

More than a decade into a career filled with commercial success and touring milestones, Matt Wertz remains proud to be an independent singer/songwriter. But don’t mistake Gun Shy for the sort of intimate album you’d hear at your local coffee shop. These are not acoustic guitar songs. They’re songs built on laptops and driven forward by dance beats. Songs that move you physically and emotionally. Songs that splash Wertz’s super-sized hooks across the backdrop of the Los Angeles skyline, creating their own brand of scenery along the way.